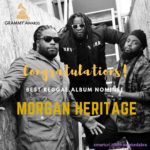 The nomination of Avrakedabra album is particularly relevant and special for Kenya and Africa as the vocals for one of the most popular songs in the album SELAH were recorded in Nairobi, Kenya. This is the first time that a song recorded on Kenyan soil has had anything to do with the Grammy Awards.

Another song “Reggae Night” was also recorded in Zimbambwe, a clear indication that this nomination has a lot to do with Africa.

“The title was inspired by our love of history. Being that we are students of history, we discovered this word and it’s various pronunciations throughout the history of time. We chose it as the title of the album because we like it and we feel it represents the new Era that our career is about to enter. The meaning we will leave to the audience to choose, since we’ve discovered so many over the dispensation of time”, explained Morgan Heritage about the album title “Avrakedabra”.

The group has also made efforts to have their music available in Africa via mobile networks. Case in point Safaricom’s Skiza platform in Kenya

Mojo of Morgan also through our sources said that he will be visiting Kenya for the December holidays before he flies back to the Grammy’s.