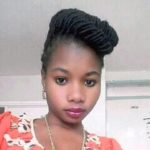 When 18-year-old Multimedia University student Cynthia Akoth boarded a Nairobi-bound Ongata Line matatu on Sunday September 25, she did not know that it would be the last ride of her life.

The soft-spoken Applied Communication student was on the way to meet her aunt that fateful afternoon – but as fate would have it, the meeting would never happen.

She met her death on Langata road at about midday, her life being one of the five that were lost when the ill-fated matatu veered off the road near Langata Police Station.

While her sudden death came as a shock to friends, family and schoolmates, a close friend reveals that Cynthia may have had a premonition of her death.

Her death opened a Pandora’s Box, irking emotions from her colleagues in the university, who reacted by staging demonstrations and blocking Magadi Road the better part of the week.

Hers was a light that was shut down too early – three weeks in Multimedia University.

“Cynthia was an ardent church-goer. We are saddened by her death. The whole university is in mourning. We are planning a requiem mass on Monday evening (October 3), and all are welcome,” said the student leader,” Multimedia University of Kenya Students Association (MUKSA) President Simeon Omooyo said.

That she was certainly popular among her circles is no mean fete as Facebook posts in the university’s Facebook group ‘Multimedia Swaggers’ are anything to go by.

Beth Karanja, a Second Year Procurement and Logistics student had this to say: “We have lost an angel.”

A somber mood engulfed the institution with students vowing to put an end to matatu menace that continues to claim young lives.

“Cynthia was very sociable and friendly. In fact, if you ever found her not smiling, you would definitely know that something was wrong. Very wrong,” said Onyango.

Olasa Valencia, a Fourth Year student taking Computer Science had a few words to say: “Rest in Peace Cynthia. This will never happen to another student. We’ll make sure sanity is restored in the matatu industry.”

But as Joy*, Cynthia’s roommate told eDaily, Cynthia’s last words were a prayer to her roommates.

“Cynthia was such a focused person. I have never seen a woman so committed in her education before. In fact, when we lazed around in bed feeling like we can’t attend the morning classes, Cynthia was already up, cleaned the room and ready to go. We used to call her ‘Our Alarm’,” said Joy.

She remembers how Cynthia offered her nuggets of wisdom. “Cynthia was like a ‘Big Siz’,” she said, adding: “She was young, but had expansive wisdom.

“Though if there was anything Cynthia wasn’t, it was being predictable. You’d never really know what to expect from her. One minute she is talking about white bed-sheets, the next minute she is already figuring out which books she hasn’t read yet.

“But if there was anything she loved more than her books, it was her Bible.

“Cynthia read the Bible every day. She was a passionate Christian, and her morals were steadfast. She could never compromise her beliefs for anything, she stood for what she knew was right,” added Joy.

Joy recounted her last moments with Cynthia: “She woke up, read the Bible, told me she wants to take a shower and go visit her aunt.”

“But before she left she told me that she had noticed that I and other roommates did not like going to church and she was worried about us.”

But it was the words she told her before she walked out the door that made an impact on Joy.

“Joy, we need to curse the evil spirits in this room. Especially the spirit of not going to church,”

But she would never make it back to pray for her roommates, as death took away an innocent soul.