Mobetto’s lawyers, Abdullah Zulu and Walter Godluck of Century Attorneys, say they have served Diamond Platnumz with a copy of the complaint and a court summon.

The lawyers claim that their client, Hamisa Mobetto, had, in previous occasions, unsuccessfully requested Diamond Platnumz to issue an apology for insinuating that she was a loose woman for sleeping with him behind his partner, Zari Hassan’s back. On top of the child support suit, the lawyers have also sued Diamond Platnumz for defamation.

The mention of Mobetto’s child support case filed at the Kisutu Juvenile Court in Dar es Salaam is penciled in for October 30, 7am.

“We have served the accused with a notice instructing him to appear in court on October 30,” said lawyer Zulu. 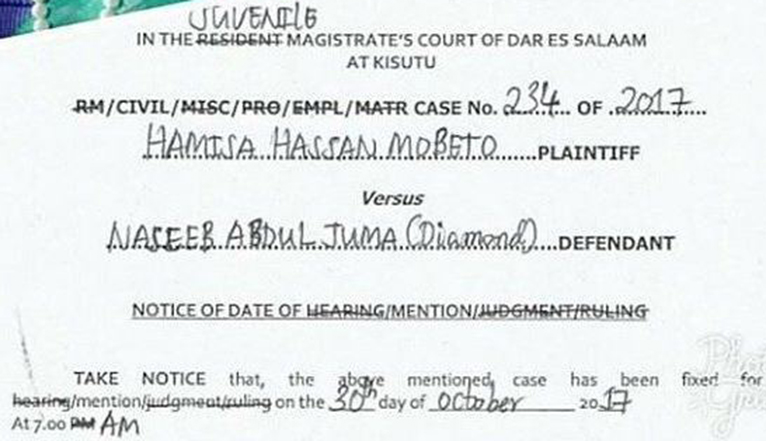 Diamond Platnumz had kept information about his child with Mobetto a top secret, until September 19, when he made the revelation on Clouds FM.

Eyebrows, had, however, been raised when Mobetto named her son Abdul Naseeb, which is the real name of singer Diamond Platnumz.

Platnumz, would in the September 19 Clouds FM interview, admit that he and Mobetto dated from 2009 to 2010, and that their love affair grew at a time when the singer was struggling to get a breakthrough in the music industry.

The two would hook up again in December, 2016, when Diamond was shooting a music video for his song called ‘Salome’, in which Mobetto featured as a vixen.

It is then that the two got intimate.

Even as the child support suit is yet to take shape, Platnumz, in the September Clouds FM interview, painted a picture of a caring, supportive father.

“I have always given Hamisa money to support the child. I also bought the mother a Toyota Rav 4, I did not want her to struggle,” said Diamond.

“Before the baby was born, I gave the mother Ksh375, 000 for delivery. The baby was born when I was in Europe. I asked my mother Sanura Kassim to visit Mobetto and the baby in hospital in August, 2017.

“Sadly Mobetto called the press and looked down upon my mother on the day she gave birth. All I want is to ask my partner, Zari Hassan, for forgiveness, and all the people that were offended by my actions. I don’t hate Mobetto, though I request her to prioritise the boy’s future; posting pictures online won’t help.

“I cannot leave Zari Hassan; I am ready to walk on my knees to South Africa to plead with Zari to forgive me,” said Diamond Platnumz.

Even after saying that he is ready to do everything humanly possible to ask his partner, Zari Hassan, for forgiveness, Diamond Platnumz seemingly has a monumental task ahead of him to persuade Zari to forgive him, this is after the wealthy Ugandan socialite and mother of Diamond’s two children, Latiffah Dangote, 2, and Prince Nillan, 10 months, removed all pictures of the top crooner from her Instagram page.

Before removing Platnumz’s pictures on the social media platform, Zari had 3, 477 posts. After the removal of the singer’s pictures, she was left with 1403 posts – all were hers.

On top of deleting pictures in which she features with him, Zari also blocked Diamond Platnumz on all social media platforms.

Zari Hassan is currently in South Africa concentrating on managing late Ivan Ssemwanga’s Brooklyn College and other property, while raising their children.

It’s not clear whether the couple will this weekend see each other like they have always done.

NO SHOW AT PLATNUMZ’S BIRTHDAY PARTIES

On October 2, Zari Hassan missed almost all the three birthday parties that were organised to celebrate Diamond Platnumz’s 28th birthday.