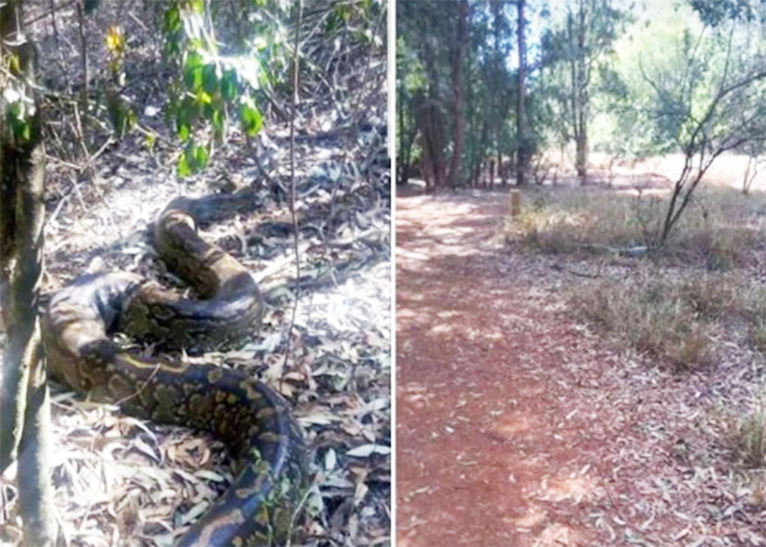 Viral pictures of a huge python spotted on the walkways of Karura Forest are authentic, the woodland’s forester in charge, Paul Musembi, has told EDAILY.

The snake was photographed last weekend by a visitor of Karura Forest, and its images shared widely on social media, causing panic among city residents, who claim they visit the facility for jogging or cycling.

“A huge snake spotted at Karura Forest. We are requesting the relevant authorities to see that it is relocated so as to ensure safety for the runners, joggers and bike riders, who use the facility for daily [physical] exercises,” said Ngugi Elius on Facebook.

However, the chairman of Friends of Karura Forest, Prof. Karanja Njoroge says the snake is harmless if unprovoked.

“The snakes [pythons] are completely harmless to human beings who are heavier than 20kgs. They won’t attack unless totally cornered or if one grabs it from behind. I don’t think that is something one would want to do,” said Prof. Njoroge.

Karura forester in charge, Paul Musembi, advises visitors of the facility to restrict themselves to the designated areas within the facility.

“The pictures of a huge python doing the rounds on social media are authentic. Karura Forest has a few snakes, and even fewer huge ones. The spotting of the now-popular python was, actually, accidental because snakes never leave their natural habitats for the walkways.

“And what we have done as Karura Forest administration is constantly clear the walkways to discourage the reptiles from inhabiting them. The animals dislike clear places, where they can be easily spotted,” said Mr Musembi.

The Karura forest boss, who has been at the facility for three weeks now, says a similar snake was spotted crossing Limuru Road in 2014.

Mr Musembi has advised Karura visitors to call forest rangers, whose contacts are placed strategically on signposts on the walkways, should they see snakes or other strange wild animals.

The forester said he doesn’t have details of the snake, including age, weight, length and gender, because “getting such information is a preserve of the Kenya Wildlife Service”.

KWS communications manager Paul Udoto, however, told EDAILY that the management of gazetted forests and the animals within falls under the jurisdictions of those respective facilities and the Kenya Forest Service.

“Karura forest falls under the Kenya Forest Service department. KFS is, therefore, the right office to inquire whether the snake lives within the forest, or not. If true – that the snake’s habitat is in Karura –, then the resource’s management can advise Kenyans, who visit the forest on what precautions they can take to ensure their safety,” said Mr Udoto.

“And also, the popular belief that snakes are automatically hostile toward human beings is not true. All depends on how the human being would act or react to the reptile,” said Mr Udoto.