The world’s first successful total penis and scrotum transplant was completed at Johns Hopkins Hospital on March 26, according to a news release issued Monday. 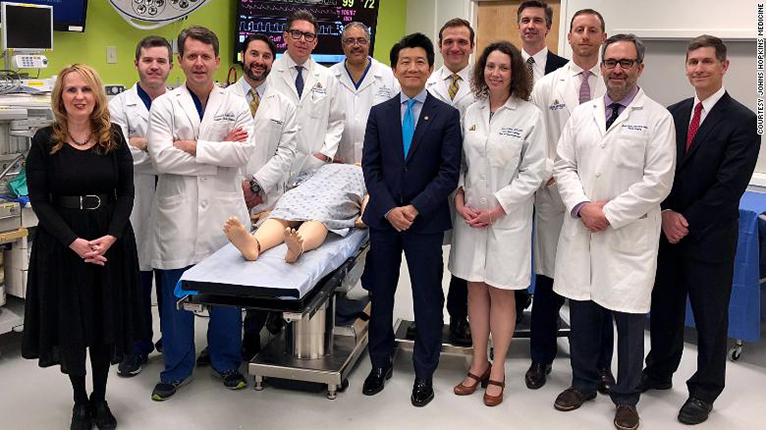 Members of the medical team who performed the first successful penis and scrotum transplant at Johns Hopkins Hospital in Baltimore. [PHOTO | CNN]

The procedure lasted 14 hours and involved nine plastic surgeons, two urological surgeons and a team of anesthesiologists, nurses and surgical technicians, according to the release. The transplant recipient, who wished to remain anonymous, is a young US serviceman who sustained injuries to his lower pelvis, lower abdominal wall and lower extremities in an improvised explosive device blast while serving in Afghanistan.

“While war injuries cause great suffering, disfigurement and disability, they have also provided the impetus for medical discoveries,” said Dr. W.P. Andrew Lee, chairman of the Department of Plastic and Reconstructive Surgery at Johns Hopkins University and one of the surgeons in the case, in a news briefing.

“While extremity amputations are visible and resultant disability obvious, some war injuries are hidden and their impact not widely appreciated by others,” Lee added. “Genitourinary injury, where the male service members’ external genitalia are lost or severely damaged, is one such ‘unspoken injury of war.’ ”

In order to perform the transplant, the team had to obtain the necessary tissues — consisting of a penis, scrotum and part of the lower abdominal wall — from a deceased donor, according to Dr. Rick Redett, clinical director of the Johns Hopkins genitourinary transplant program and another surgeon on the case.

“To perform the transplant, we procured the necessary tissue from the donor to restore normal anatomy in the recipient,” Redett said in a statement.

During the procedure, three arteries, four veins and two nerves were connected under microscopic guidance in order to provide adequate blood flow and sensation to the transplanted tissue, Redett said.

However, the donor’s testicles and vas deferens — which produce and transport sperm — were not transplanted due to ethical concerns, according to Dr. Gerald Brandacher, scientific director of the Composite Tissue Allotransplantation Program at Johns Hopkins and a surgeon on the case.

“For ethical reasons, we would not want to transplant the germ line from the donor, because that would mean that, were the recipient to father a child, that actually the genetic background of the child would be from the donor and not from the recipient,” Brandacher said. “But in a second step, the patient will receive testicle prostheses.”

ording to Lee, the transplant serves as the culmination of over five years of research and collaboration between multiple medical disciplines at Johns Hopkins.

“In 2013, we assembled a team of plastic surgeons, urologists, transplant specialists, psychologists and bioethicists and began the preparation for genitourinary transplantation,” he said.

“We performed multiple surgical rehearsals of transplant in cadavers. We took notes of what we learned, refined our techniques and devised a plan for both graft procurement and transplantation.”

In 2014, the first successful penis transplant was performed in South Africa by a team of physicians at Stellenbosch University in Cape Town and Tygerberg Hospital. But the current case is the first to include transplantation of the scrotum and parts of the lower abdominal wall, according to Lee.

“Our surgical team consisting of nine plastic surgeons and two urologic surgeons performed the first total penis and scrotum transplant in the world,” Lee said. “I want to recognize the skills and dedication of the physicians, nurses and staff at Johns Hopkins that were essential to this groundbreaking procedure.”

“These life-changing VCA transplants can only occur when a donor family looks past their grief and gives to someone in need,” said Alexandra Glazier, president of New England Donor Services, in a statement.

New England Donor Services is a federally designated organization that helps to coordinate organ and tissue transplants in the Northeast region, according to Glazier.

“Since 2009, New England Donor Services has requested and received permission 13 times from families for VCA donation resulting in the transplant of 19 VCA grafts,” she added. “In this case, we worked closely with our colleagues at the Living Legacy Foundation, the organ procurement organization serving most of Maryland, to facilitate and coordinate the recovery of this unique donation for transplant by the Hopkins team.”

According to Lee, the Comprehensive Transplant Center at Johns Hopkins has been a pioneer in many of the recent advancements in VCA procedures.

“Just over five years ago, the first quadruple amputee survivor in Iraq, US Army Sgt. Brendan Marrocco, received a double arm transplant at Johns Hopkins,” Lee said. “And just over five months ago, our team transplanted two new arms into Army National Guard Sgt. Eric Lund, who lost both arms just below his shoulders from a roadside bomb in Afghanistan.”

Nearly one month after the procedure, the penis transplant recipient appears to be recovering well and is expected to be discharged later this week, according to Redett.

“Our patient is recovering from the transplant well. He is up walking, and the graft shows no signs of infection or rejection,” Redett said. “It is our hope that such a life-enhancing transplant will allow him to regain urinary and sexual function and lead a more normal life.”

The patient is expected to regain full sexual and urinary function in the coming months, though he will not be able to produce sperm, according to Brandacher.

“All the research that we have done and all the experience that we have from our urology colleagues clearly indicates that he will regain full function of the penis with regard to urination … to have an erection and to have intercourse,” Brandacher said.

After the announcement of the surgery, the donor’s family, which also was not mentioned by name, released a statement thanking the recipient for his service: “We are all very proud that our loved one was able to help a young man that served this country. We are so thankful to say that our loved one would be proud and honored to know he provided such a special gift to you. As a family, we are very supportive of all the men and women who serve our country and grateful for the job you did for this nation.”