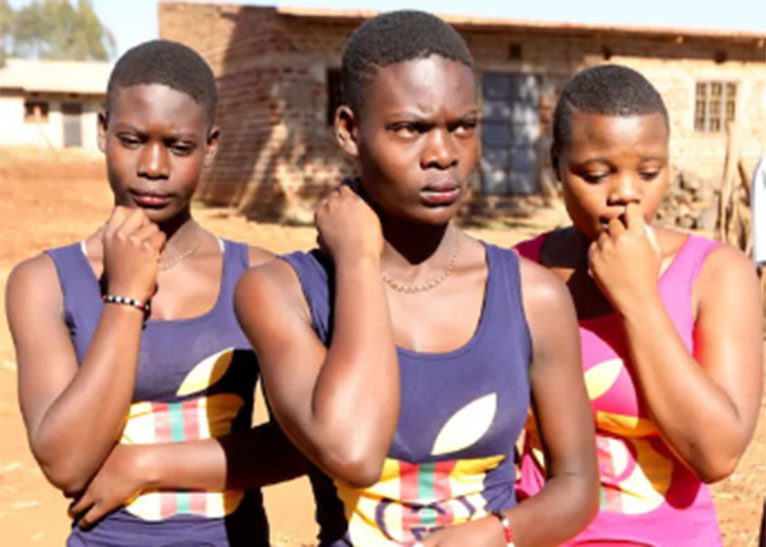 Police at Kakamega post claim they detained twin girls — Sharon Mitekwa and Melon Lutenyo —, Mevies Imbaya and Mevies’ mother, Angeline Omina, so as to manage tensions which had arisen after Ms Omina forcefully took away Mevies from Sharon and Melon’s family in Kakamega on Thursday, June 20.

The four were detained overnight at Kakamega Police Station following chaos which had erupted at Kakamega Town as Ms Omina — with the help of police –, snatched Mevies Imbaya from the twin girls’ relatives.

“Yes, we held the three girls and one of the mothers at our station in Kakamega. And, we did this to ensure their safety, given tensions were simmering between the two families. Ignore rumours that we arrested them; no, we only put them in safe custody,” Kakamega County Police Commander Bernard Muli told EDAILY.

The girls were on their way to the office of Kakamega County Governor Wycliffe Oparanya, who had invited them for a meeting.

Angeline Omina, the mother of Mevies Imbaya forcefully took away her daughter from Rosemary Onyango, the biological mother of twin girls; Sharon Mitekwa and Melon Lutenyo.

Mevies was originally living with Ms Onyango and Melon in Kakamega. All through, Mevies was known to be Melon’s twin sister.

Sharon, on the other hand, lived with Ms Omina in Kangemi, Nairobi as Ms Omina’s daughter.

Sharon and Melon’s grandfather, Shem Abuti, said Mevies refused to go with her mother, threatening to kill herself if she was separated from Sharon and Melon.

Her threats, however, fell on deaf ears as Ms Omina managed to forcefully take her away.

Police, however, swung into action and took the four to Kakamega Police Post.

“The two families should have sat down and reached a mutual agreement. Omina, however, came armed with police officers, an indication that she wasn’t acting in good faith,” said Rosemary Onyango’s family member identified only as John.

“When we realised our girl [Sharon] was living with her [Omina], we did not confront her with a battalion of police officers. Omina wrongly used the Kenyan police officers.”

Until the incident, the three girls were living with Sharon and Melon’s family at Furfaro area in Likuyani, Kakamega County.

Police said there was nothing they could do to stop Ms Omina from taking Mevies, given she [Ms Omina] is her biological mother.

“Omina tried to leave for Nairobi with Mevies. As law enforcement agents, there is nothing much we can do, given she is her biological mother,” said Kakamega County Police Commander Bernard Muli.

DNA tests conducted on the three 19-year-old girls last Saturday revealed that — as was initially suspected by Kenyans — Sharon and Melon are biological sisters, whereas Mevies, the light-skinned of the three girls, was Ms Omina’s child.

The move by Ms Omina to ‘forcefully’ take away her daughter has dealt a blow to the three girls’ wish for unity.

On Monday, June 17, the two families’ spokesperson, Wilson Maruti, who is also Mevies’ biological father, vowed that attempts to separate the three girls would be vehemently resisted.

“We have three children… the girls will not be separated; they will be together, and if possible when we get a sponsor, we will put them up in one school,” said Mr Maruti.

The spokesperson further said that the girls would choose where they would want to stay during school holidays.

All the three girls, who are currently in Form Four at different secondary schools in Kakamega, were born at the Kakamega County Referral Hospital, formerly known as Kakamega Provincial Hospital, around the same time in August 1999.

It is suspected that Melon and Sharon were separated from each other when they were placed under nursery care at the medical facility.

Mevies was also placed under the same care; and it is suspected the girls were “unintentionally” switched shortly after birth.

Meanwhile, Sharon and Melon, who are this year’s KCSE candidates, said they will go back to Form Three in a bid to “improve their academic grades”.

Addressing journalists in Nairobi on Monday, June 17, the teenagers said they hope their move would result in good grades in next year’s KCSE.

Sharon studies at Shikoti Girls’ High School in Kakamega County, whereas Melon is a student at Kongoni Secondary School located in the same county.