Ashleys Kenya Limited Chief Executive Officer Terry Mungai has faulted a section of Kenyans for referring to NYS scandal suspect Josephine Kabura as a “mere hairdresser” – a term she says demeans a profession that employs thousands of Kenyans.

In a press statement released Tuesday, November 9, Ms Mungai said she pays her employees better than teachers and doctors on the government payroll.

“As Ashleys Kenya Limited, a major stakeholder in the Hair and Beauty industry, we strongly condemn the manner in which Josephine Kabura is constantly referred to as a ‘mere’ hairdresser either presently or in the past…Please do not degrade a profession that employs so many Kenyans – especially the youth and one that contributes huge sums in taxes,” reads the introductory part of the statement addressed to the Public Accounts Committee (PAC), media houses and ‘interested parties’.

Attached below is Ms Mungai’s statement: 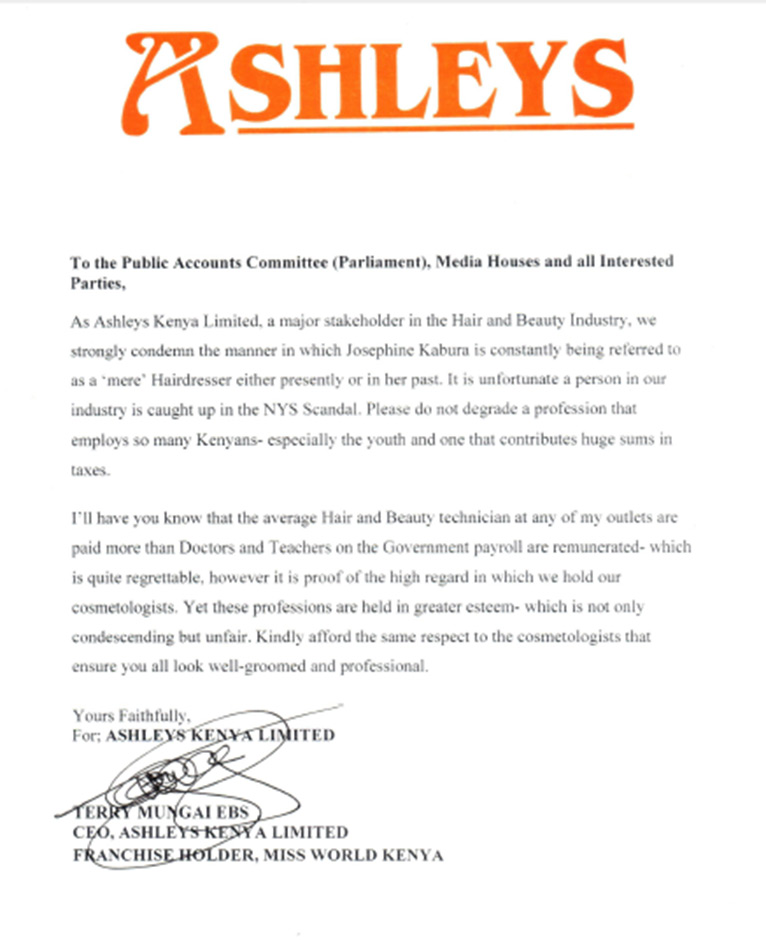 Former Devolution Cabinet Secretary Ms Anne Waiguru had in past descriptions referred to Josephine Kabura as a “mere hairdresser.”

Ms Kabura last week, however, told a parliamentary committee that she has a diploma and higher diploma in information technology and worked briefly for Kenya Data Networks before going full-time into “doing business” with the government.

Ms Kabura described Ms Waiguru as a friend, saying she introduced her to National Youth Service (NYS) in 2013, after which she won tenders worth millions of shillings after starting out with only KSh2, 000 in her bank account.

Ms Kabura is said to have fraudulently received over KSh1.8 billion from the NYS through her companies.

She operated nearly 20 companies which received the money in fraudulent circumstances.

In most of the cases, the companies were barely two months old, had no prior dealings with NYS, were not pre-qualified, were dealing in goods and services for which they were not officially registered and were all owned by Ms Kabura.