Croatian President Kolinda Grabar-Kitarovic has been praised by fans across the globe for personally attending her country’s quarter-final triumph over Russia.

The Head of State was seen celebrating in front of the Russian prime minister and in the players’ changing rooms after they knocked the hosts out on penalties. 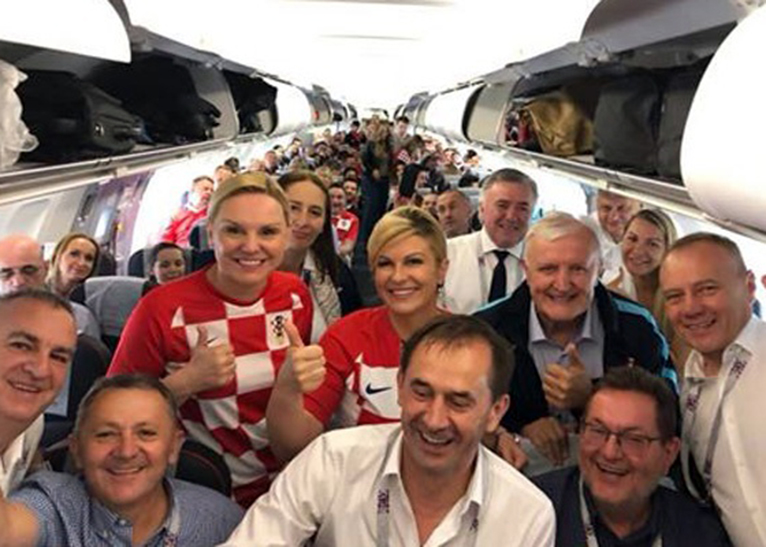 The Croatian leader on July 1 melted online users’ hearts when she boarded economy class to Russia to cheer on her nation’s football team at the FIFA World Cup.

Grabar-Kitarovic shared a photo with other passengers on her Facebook page.

She arrived in time for her team’s round of 16 clash with Denmark and watched the game from the stands alongside other football fans.

“I wanted to showcase that I am a football fan, like everyone else; I wanted to support the team among other fans in the stands. I put on a shirt with national symbols, whereas the dress code in the VIP zone, which usually presupposes long gowns, wouldn’t have permitted such an outfit,” the Russian website Sportbox quoted her as saying.

After Croatia won the penalty shootout she went to the team’s changing rooms to give them hugs and congratulate the coach and players.

But just who is Kolinda Grabar-Kitarovic?

The Croatian president is 50-years-old. She studied in Zagreb, Vienna, Washington DC and Havard, before completing her doctoral studies in her home country three years ago.

She is fluent in Croatian, English, Spanish and Portuguese, while she has some understanding of German, French and Italian.

She became the fourth President of Croatia in February 2015, the first woman to do so.

Kolinda Kitarovic, of the Croatian Democratic Union, HDZ, won the second round of the presidential election on January 11 in Croatia. She won 50.74% of the vote and beat former President Ivo Josipovic of the Social Democratic Party, SDP, who garnered 49.26% of the votes.

“There is no place for triumphalism,” declared Kolinda Grabar-Kitarovic when the results were announced.

She did however say: “I promise you that Croatia will be a prosperous, wealthy country and one of the most developed in the EU and the world,” adding: “I shall not divide the people, on the contrary, I shall look for a way to unite it, to settle the issues we have, the poor economic situation, all of the social problems the country has. Let’s work together for the prosperity of Croatia.”

Until the defeat, Mr Josipovic was the most popular political personality in the country. He, however, suffered because of Croatia’s poor economic situation.

After the first round of voting Prime Minister Zoran Milanovic (SDP) admitted that his government’s poor economic results had undoubtedly represented a “burden” for the ex-President.

Ms Grabar-Kitarovic comes from Rijeka and is a graduate of the University of Zagreb in English, Spanish and International Relations.

She also studied in the USA, a country where she spent her childhood and adolescence, notably at the George Washington University, Harvard and Johns Hopkins University.

After working in the diplomatic field, she was elected MP in the general election on November 23, 2003.

In 2008, Kolinda Grabar-Kitarovic became Croatia’s Ambassador to the US before joining NATO three years later, where she became the first woman to be appointed Deputy Secretary General to the Secretary General responsible for public information.

Kolinda Grabar got married to Jakov Kitarovic in 1996 with whom she has two children with; a 17-year-old daughter, Katarina, and a 15-year-old son, Luka.

She was, in 2016, confused for glamour model Coco Austin, when pictures of Coco dressed in a bikini were shared online.