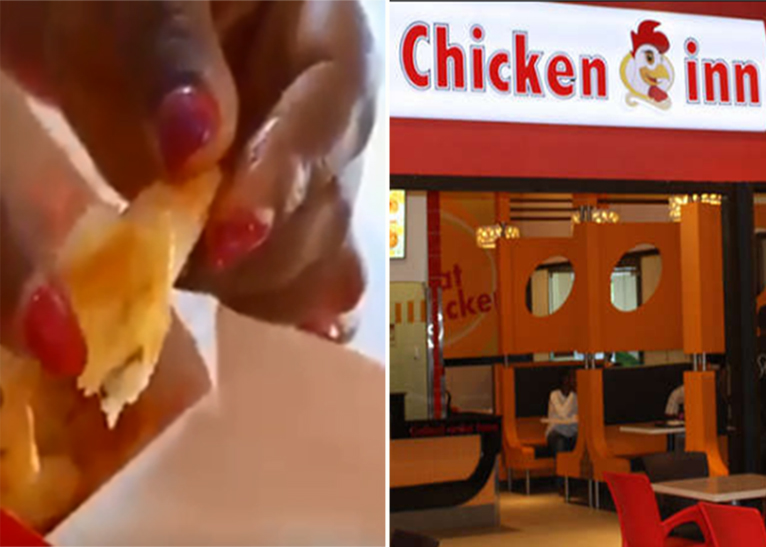 Popular fast food seller, Chicken Inn, has apologised for subjecting one of its city customers to a “disturbing” discovery.

A video of a lady expressing her gripe over a potato chip she bought at Chicken Inn located at Two Rivers Mall has gone viral online.

The buyer showed parts of the potato chip that contained black objects, which, she said, were worms.

Social media influencer, Xtian Dela, tweeted the disgruntled customer’s video, and went ahead to share his experience with Chicken Inn foods, which, he suggested, was “worse”.

If you love your life, AVOID Chicken Inn like a PLAGUE!!…They sold me rotten chicken wings on two separate occasions. The Westlands Oil Libya branch, opposite Sankara. To make matters worse, I had bought like 10 boxes, for my friends. This particular case doesn't shock me pic.twitter.com/fPP2FdB5xw

“If you love your life, avoid Chicken Inn like a plague! They sold me rotten chicken wings on two separate occasions [at] the Westlands OiLibya branch; opposite Sankara [Hotel]. To make matters worse, I had bought like 10 boxes for my friends. This particular case doesn’t shock me,” said Xtian.

The post opened the floodgates of criticism by disappointed Chicken Inn customers, prompting the fast food seller to issue a statement.

Twitter user Ken Wes said: “This also happened to me twice at Chicken Inn; one on Mbagathi Way and another at Garden City Mall. Due to the rotten chicken I was served, I suffered food poisoning. Avoid Chicken Inn, guys.”

Another user Al.Fy said: “This [Chicken Inn] is the worst [fast food restaurant]. I had to buy medicine valued at Ksh7, 000 because of what their food did to my stomach.”

Call Me Ess said: “The Ngong Road [Chicken Inn] outlet is the worst! They will literally sell you uncooked, rotten chicken.”

On Friday, April 5, Chicken Inn, via its Twitter handle (@ChickenInnKe), apologised to the upset female customer, promising to put in place measures that would avert such shocking experiences in the future.

Kindly note the below; pic.twitter.com/RuPOmjlJjw

“On Thursday 4th of April 2019 it came to our attention that a video had been posted on social media regarding a compromised portion of chips purchased by a customer from one of our branches,” said Chicken Inn.

“We apologise to how disturbing this was to the customer concerned and to our loyal customers at large. We take matters of food and safety very seriously as these are core to our business. We wish to assure our customers that we are investigating the matter internally with our supplier to get to the root of what happened.”