Activities at Nyeri High School were temporarily brought to a standstill Wednesday morning, when a student set to join Form One reported in a chopper. 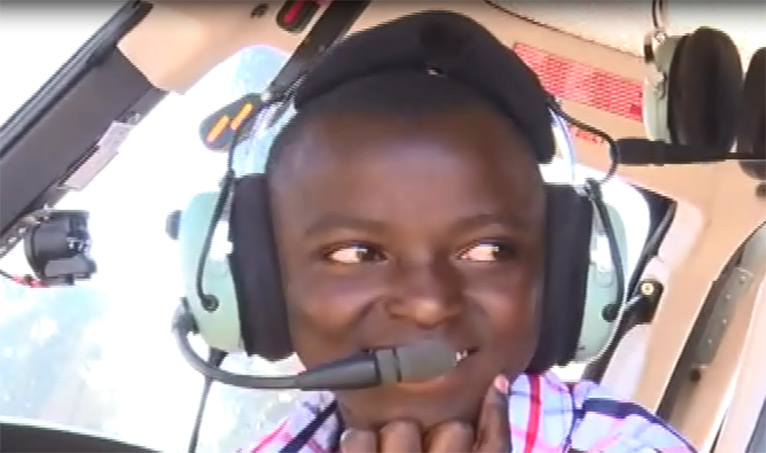 Kelvin Muriuki, who sat 2016 KCPE at Karicheni Primary School and scored 372 marks out of the possible 500, was flown to Nyeri High School in a chopper, courtesy of the Kenya Air Force Veterans Association.

Muriuki, 14, who comes from a needy background, dreams of becoming a pilot; and his education sponsors, the Kenya Air Force Veterans Association, made him taste the feeling by giving him his first trip to school in a chopper.

The rare spectacle temporarily interrupted activities at the Nyeri High School when the copter carrying Muriuki, his parents Peter Nderitu and Margaret Wangui and sponsors touched down at the institution’s playing ground.

Other students, who had already reported to school, milled around the chopper to have a glimpse of it.

His parents, who are casual labourers, could not hide their joy following the breakthrough after efforts to secure sponsorship elsewhere bore no fruits.

The association official, retired Colonel Joseph King’ori, said Muriuki’s ambition to join the aviation industry caught their attention and they felt the need to chip in and make it a reality.

Before getting sponsorship for his education, Muriuki would accompany his father to a quarry to strive raise the needed KSh53, 000 by Nyeri High School.

Sadly, they raised only KSh2, 000 for the period the 14-year-old boy had worked alongside his father – and Muriuki had contemplated repeating Standard Eight.

Luckily, the sponsorship came his way.

Watch Form One student report to school in chopper: VIDEO