An agitated wife in Ukunda, Kwale County has left her pastor husband counting losses after she destroyed the man’s café, accusing him of infidelity. 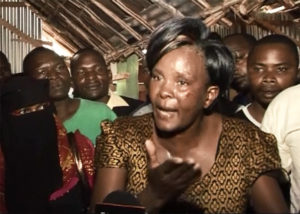 Ruth Nyaga claims her husband of 20 years, Daniel Nyaga, put up a café for his mpango wa kando PHOTO/EDAILY

Ruth Nyaga claims her husband of 20 years, Daniel Nyaga, put up a café for his mpango wa kando, and he abandoned his family to wallow in poverty.

Saturday morning Mrs. Nyaga, accompanied with her friend, stormed her husband’s restaurant situated at Kona Ya Chafu area and started scattering tables and chairs, throwing bottles in the air – and any other object of value that came to sight –, forcing dining customers to flee for safety.

Also Read: Revealed: How to tell if your wife has began cheating on you

Meals were littered on the floor and a television set broken to pieces as other facilities were looted.

“I inquired from my husband if he had completed putting up the cafeteria. He was shocked that I knew of his secret investment. Angry at me, he questioned who informed me about his underground project,” the aggrieved woman told eDaily.

Ruth reportedly found out that her husband was secretly seeing another woman – who he allegedly put up the hotel business for.

“If only my husband had informed me of his clandestine activities, I would not have resorted to doing what I did (destroying hotel property). I would have warmly welcomed his second wife,” added Mrs. Nyaga.

Mrs. Nyaga says her husband “enslaved” their son at the hotel – only for the proceeds to benefit the other woman.

“He (husband) took my son and employed him as a handyman. He recently fired him, claiming that the boy stole KSh500 from the hotel. I am very bitter at him (husband). We have three children together. The first born is 20, the second born is 14 and the last born is 10.”

“I decided to raid the hotel because the man has been misusing my son, he works like a slave at the hotel – and I don’t see any returns coming home.”

At the scene, the mother of three shouted at her husband: “Today I want to know my status – am I your wife or not? If you openly denounce me, I would not bother you again.”

The unapologetic husband said he has the rights to marry more women and that his wife should not cause chaos over “trivial issues”.

The husband says he married according to Tharaka community customs which allow a man to marry up to four wives.

“I was not under any obligation to inform you (of my hotel business and presence of second woman),” Nyaga told his wife, adding: “Even your father has two wives.”

Ruth’s friend Lydia Kawira accuses Mr. Nyaga’s lover of having the habit of seducing married men – and using herself as an example, she said the wayward woman tried to lure her husband on several occasions.

Kawira says her husband fell for the woman’s charms and started dating her secretly. Kawira found out almost immediately and extinguished the illicit affair before it grew deep.

Ruth accused Mr. Nyaga’s friend Chimera Mwamunga of bad influence to her husband as he (Chimera) encouraged Nyaga to get another woman.

Mwamunga maintains he sees no wrong in Nyaga having more than one wife.

Nonetheless, he observes the matter should have been resolved at home – and not in the public sphere.

“This is so shameful; such incidents don’t happen in these areas, we only see them on television. The woman’s actions have run her husband’s business into losses. The wife would have killed the other woman, she was armed with a knife,” he said.

Mr and Mrs Nyaga headed home from the drama venue while arguing. It is not yet established what followed thereafter.