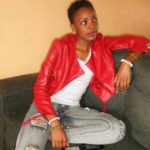 A Fourth Year student at Multimedia University of Kenya (MMU) was on Tuesday, November 1, killed in an accident involving a construction site tractor in the university’s main campus compound.
Jackline Kiraithe, a daughter of one of the university drivers, was knocked down by the fork lift tractor which was fully loaded with construction material preventing the driver from seeing her.

Sources say Ms Kiraithe had her earphones in when the accident occurred.

The deceased was, in the same breathe, pursuing a second bachelor’s degree in Information Technology from Greenwich University.

An MMU student leader, who spoke in confidence, said the driver of the tractor upon knocking down the girl, surrendered himself to the university security as the lady called her dad amidst pain. Another driver came and drove the tractor from the scene as the student was rushed to Nairobi Women’s Hospital (Rongai) where she was referred to the main hospital in Hurlingham.

Ms Kiraithe, however, succumbed to her injuries.

The driver who allegedly caused the accident was arrested as the other (driver) who drove the tractor from accident scene is currently under investigation for tampering with evidence.

MMU student leaders have said they would not engage in protests and would stand in solidarity with the bereaved family as they let the police conduct their investigations.

The suspect has been transferred to Hardy police station in Karen as investigations into the matter continue.