Nairobi Governor Mike Sonko now says the original lion statue mounted on the roundabout of University Way was to be used to take measurements, which would, thereafter, be applied in sculpturing an eye-candy monument.

Taking to his Facebook page Saturday, Sonko said the ridiculous lion sculpture was only 45 per cent complete; and that Kenyans ought to have been more patient with his city beautification work.

The original lion statue has since been replaced by a better-looking one. The change happened Friday night. 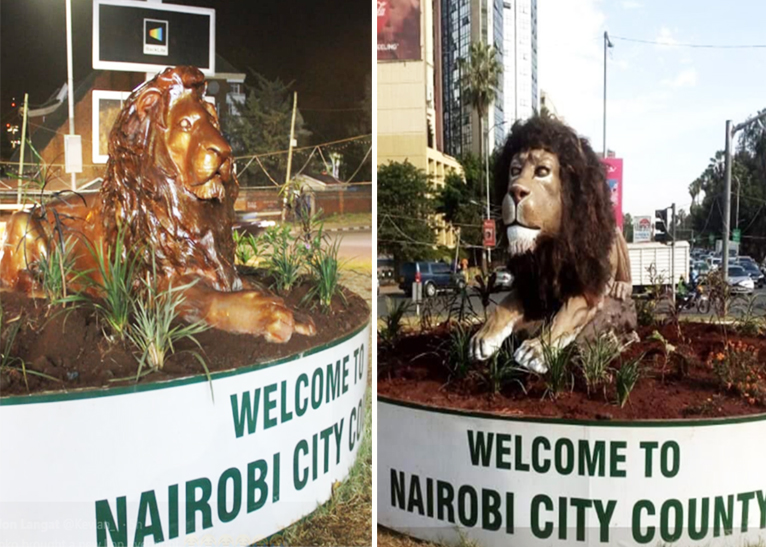 “While I was away attending my relatives funeral at the Coast, the unfinished lion statue caused a lot of uproar on social media. I wish to respond as here under:

“Good things take much time and often involve a very elaborate process. The mounting and finishing of such a statue had to be taken through different artistic steps towards the final artwork by our local artists from Nairobi.

“Many of my lovely critics missed out for not knowing what it takes to plan, design, make and mount a life-size statue from start to finish. The work has to be done in meticulous stages starting with a “dummy” to facilitate taking of measurements and planning the installation work.

“The statue that was trending for all the wrong reasons was certainly not the real deal yet. At least it helped many realise we are doing much out of the limelight to face-lift Nairobi City landscape.

“In truth, you just can’t install a monument like that statue overnight. So much work has to be put in to make a statue come to life. Nothing good ever gets done overnight!

“The “lion” that went viral was put there just to help our local artists in taking measurements and to guide the positioning for the proper installation and final artwork including trimming of the artificial hair and edges then final polishing which is now 75% done.

“Everyone who has any idea about sculpture will tell you even the famous sculptor “Michelangelo” didn’t bring the perfect artwork to the site on day one. Maybe Art & Craft should be reintroduced in primary school to help us appreciate the basics of sculpture.

“Even after the installation of the statue, more remains to be done including planting of green ground cover, beautiful attractive tree seedlings and flowers bringing everything to life. As we speak, the said statue is only 75% done.

“The good news is that this lion statue and some of the beautification programmes are my personal initiatives and no public funds are being spent on them apart from paying the casuals who are maintaining the grass and flowers and whose payment comes direct to their bank accounts from treasury at a renewal contract of 3 months approved by the outgoing county public service board as provided for in the law.

“We do not handle any cash payments at all. All the flowers and grass you are seeing around Nairobi have been bought by myself. I just love Nairobi City and want to leave it better than I found it.

“In as much as I at times accept healthy criticism, my intention is to make similar statutes including the big 5 wild animals as part of the perfect celebration of our Nairobi City County’s unique heritage as the only capital City in the World with a National Park.

“So many people come from so far to see our Big Game and it is only fair we give them an idea of what to expect once they venture beyond the streets of Nairobi.

“Recently, Nairobi City was ranked the 3rd Best Tourist Destination in the World. This owes to, among others, to our much celebrated Nairobi Beautification Programme and other innovative initiatives.

“Once again, we must appreciate that every good thing takes time. The statue that my lovely critics on social media had picked up was brought to the roundabout while incomplete it was just 45% done.”