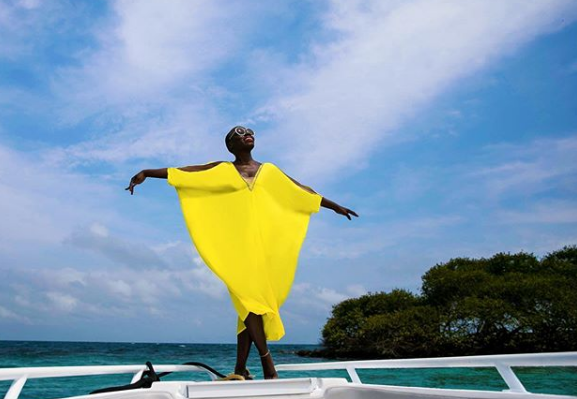 Some people set records by jumping the highest or running the fastest.

But for Jessica Nabongo, a UN employee turned travel blogger, it’s by becoming the first black woman to visit every country on Earth.

She set out to visit all 193 countries in the world in 2016, and on October 6 arrived the last on her list, Seychelles, according to a post on her Instagram page. She also clocked up a couple of what the UN calls “non-observer status” territories, taking her total to 195.

“Welcome to the Seychelles!! Country 195 of 195! So much to say but for now I will just say thank you to this entire community for all of your support. This was our journey and thanks to all of you who came along for the ride!!,” she wrote.

Welcome to the Seychelles 🇸🇨 !! Country 195 of 195! 😝😆😏🥺😩😳🤯🤗😎⁣⁣⁣ ⁣⁣⁣ So much to say but for now I will just say thank you to this entire community for all of your support. This was our journey and thanks to all of you who came along for the ride!! ⁣⁣⁣ ⁣⁣⁣ Thanks to the 54 people that are here celebrating with me in the Seychelles with the gorgeous backdrop of the @thehresortseychelles with the planning expertise of @vividvibeseventplanning! Last night was unreal and I’m so so grateful. My heart is full!!! ⁣⁣⁣ ⁣⁣⁣ 👗 : Sho via @neimanmarcus 👠 : Yeezy Season 8 via @mytheresa.com Earrings: @84gem 📷 : @christa.shoots #catchmein195 #catchmeinseychelles #catchmeintheseychelles

Born in Detroit to Ugandan parents and holding two passports, Nabongo’s epic odyssey hasn’t just been about getting her name in a record book.

She’s hoping to pave the way for women and people of color to do the same.

Although she felt like she’d achieved “the American dream” by landing a six-figure job at a pharmaceutical company after college and buying her own place in the Motor City, the work didn’t satisfy her.

She began renting out her condo to make money, then hit the road — first, teaching English in Japan, then grad school at the London School of Economics, followed by a job at the United Nations that took her to Benin and then Italy. But that wasn’t enough to sate the travel bug.

But simply being able to afford a ticket doesn’t mean that travel is easy or seamless.

Nabongo’s experience traveling the world undercut many of the exhortations travel brands have to “live like a local,” being able to seamlessly blend in anywhere simply by changing clothes or ordering coffee a certain way.

Often, as the only person of color in a crowd, she stood out whether she wanted to or not. Nabongo also has dark skin and shaves her head.

To date, there are about 150 known people who have been to every country, the majority of whom are white men traveling on European passports — the ones who have the option to “blend in” in more places.

Welcome to Algeria 🇩🇿!!! Country 193 of 195!! Algeria is the biggest country in Africa, claiming the title after South Sudan gained independence in 2011. Algiers, the stunning capital perched on the Mediterranean Sea is dotted with French colonial architecture – balcony fronted flats with large windows, and remnants of the Ottoman empire in the casbah. ⁣ ⁣ Here I am standing in front of city hall and you will see Arabic with Amzigh, an indigenous script below. Most Algerians can trace their lineage to one of five major tribes still easily identifiable today. ⁣ ⁣ For some, getting a visa to Algeria can be difficult and take a lot of time. I’m the visa whisperer so with a little persistence and convincing I was able to get mine faster than anticipated. If you want to visit Algeria definitely get in touch with @fancyellow_travel_algeria because they can help make the process very smooth and their guides are amazing! ⁣ ⁣ Have you heard of Algeria? Visited? Is it on your bucket list? #catchmeinalgeria

As of April 2018, there were 193 recognized countries in the United Nations, plus two with “non-observer status.” Nabongo visited them all. Her passports have stamps from places as far-flung as Nigeria, Cuba, Turkey and Laos.

To support her travel habits, she founded a company called Jet Black, which organizes custom itineraries for small group trips in Africa, plus sells travel gear like branded T-shirts and passport covers.

As an influencer, she also works with hotel and hospitality brands, some of whom offer up free stays in exchange for social media posts. She also accepts donations on a GoFundMe page.

“Navigating the world as a woman can be very difficult,” Nabongo told CNN Travel in 2018. “I’ve had a pretty wide range of experiences. I’ve been accused of being a prostitute. I’ve had men chase me before. I’ve been assaulted on the street.”

An American African in Africa

And despite being a self-identified African, that didn’t mean everything was smooth sailing when Nabongo traveled around Africa.

A few times, she watched in frustration as she was forced to wait behind white tourists or forced to pay bribes in order to cross borders that should have been open to her.

TRAVELING SOLO AS A WOMAN⁣ ⁣ When I arrived to check in for my flight to Pakistan, there were only men in line and I felt slightly uncomfortable, it had nothing to do with them and everything to do with me. Fast forward and I’ve been blown away by the kindness and respect that Pakistani men have exhibited, some of the best treatment by men in all the countries I’ve visited. While standing waiting for my luggage a man brought me a trolley without me asking. Men have often stepped to the side and keep a healthy distance which has made me feel super comfortable as a woman traveling solo in this country. ⁣ ⁣ So far I have traveled to 85 countries solo spanning six continents! My first time traveling solo was in 2007 to London, Paris and Madrid. I reached the cities on my own then met friends. Paris chewed me up and spit me out, but that’s a story for another time. ⁣ ⁣ My first full solo trip was Costa Rica in 2009. I recall not really knowing what to do on my own. I spent time walking around, reading, journaling and sitting in parks. I joined a group tour for a day trip to Arenal and asked strangers to take my picture as I still do today. ⁣ ⁣ People often ask me the best countries for solo travel and I think that anywhere in the world is fine for solo travel depending on your level of comfort with the culture. If you are American you may be comfortable in places that someone from the Middle East may not be and vice versa so to give a list would be doing a disservice to the huge diversity of my followers. ⁣ ⁣ The only place that I personally will never travel to alone again is India. I simply do not feel comfortable alone there, the men make me very very uncomfortable. That isn’t to say you shouldn’t. There are plenty of women I know that have done repeat solo trips to India. We each have to have our own experiences! ⁣ ⁣ Tips for solo travel:⁣ 1. Go somewhere you will feel comfortable, because when you’re comfortable you can be confident and when you’re confident you don’t look vulnerable. ⁣ 2. Trust your intuition, she’s probably right!! ⁣ ⁣ Have you ever traveled solo? Which do you recommend or not recommend for solo travelers? Any other tips? 📷 @projectfairplay

However, some countries were better than others: “Senegal, it’s amazing. You don’t see them privileging white people over Africans. They treat everyone the same. Same in Ghana.”

Adding to the challenge of seeing the world is the fact that Nabongo often travels solo. She generally eschews Airbnbs for hotels, where she can count on a 24-hour front desk to keep her feeling secure. She prefers to bring friends along to share the experience when possible.

Sometimes, though, the tables turn and Nabongo finds herself abroad speaking on behalf of Americans. This is particularly likely in countries that have warned their citizens against traveling to the United States or have concerns about gun violence.

“While I’ve been abroad, I’ve had people ask me about how safe is the US, especially for people of color,” Nabongo said.

“And you know, I have to tell them, ‘Yes, there is a high risk for you in particular in urban areas. But then also in rural areas because you’re a minority.’ It’s a very strange and difficult thing to navigate.”

Still, comments and questions like those only emphasize the importance of Nabongo’s work.

While she does not identify as an activist, sometimes her mere presence is enough to make a difference or cause a person to see things differently. This is a common sentiment echoed by many women of color: Simply being who you are is a statement.

Whether counseling a person of color who’s afraid to travel or a local who thinks it’s okay to try and touch her head without asking, Nabongo serves a cultural ambassador role that may not be visible behind those colorful shots she posts on Instagram.

Speaking of Instagram, Nabongo has some words of caution for travelers who use African people as objects, props or backdrops in their photos, something she encounters way too often online.

“Instagram is great. I love it. It’s obviously given me a platform so that I can educate people about different places in the world,” she said.

“But it’s also a very dangerous and disgusting place as well because a lot of people want a bigger following. They want the likes. They want pictures that go viral. So they’re willing to use anybody and anything.”

“We cannot negate the optics of whiteness in Africa. We can’t,” she said.

Ultimately, Nabongo says her quest was not just about crossing countries off a list. It was about changing the perception of female travelers, of travelers of color and of anyone who doesn’t have the option of passing for a local in a given community.

“Racism is a thing. There’s nothing we can do to get around that. History has made it that way. I exist as a black person in this world and I’m not going to let that hinder me from going anywhere I want to go. Namely, everywhere.”