An ex-welder from Kipsaina in Trans-Nzoia County, who lost his eye sight after a gas cylinder exploded in 2008 when working, has been abandoned by relatives and close friends. 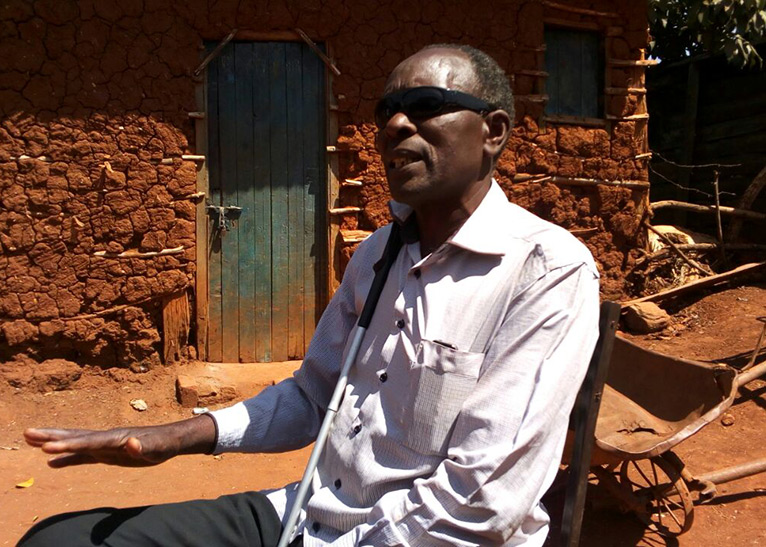 Nicholas Lusweti says his life changed completely after he became blind, rendering him unable to fend for his family [PHOTO/EDAILY]

Nicholas Lusweti, who was a metal worker from 1977 to 2008, says his life changed completely after he became blind, rendering him unable to fend for his family that comprises a wife and 11 children.

“On the fateful day in 2008, a gas tank exploded when I was performing repair welds on a car and the safety glass shattered, with pieces of glass penetrating my eyes. Following the incident, one of my eyes lost its ability to see on the spot, while another lost its ability to see a few months later after undergoing treatment in different hospitals. For over eight years now I have led a miserable life, with friends and relatives deserting me one after another day by day,” Mr Lusweti told eDaily.

“Most of my equipment were stolen, and there’s nothing much I could do. Neighbours and my own children have abandoned me, with some saying I am burden.”

Mr Lusweti’s wife, Violet Lusweti, is the only person who has stood by him, saying she cannot engage in income-generating activities because she has to look after her blind husband.

“I can’t leave his vicinity because I have to guide him to where he wants to go to. For example, when I leave him behind and rain happens to fall when he is outside the house, it will be difficult for him to access the house,” said Violet Lusweti.

A neighbour, who remained anonymous, said Mr Lusweti has been perceived as a liability by residents.

“Since losing his eye sight, many see Lusweti as a ‘problem’ in the village. All his friends are nowhere to be found. Sometimes when he is passing by and his ex-cronies were having a conversation, you’d hear them say: ‘Keep quiet till he passes us.’ That is not good at all,” said Lusweti’s neighbour.

They have abandoned me! Man narrates sad ordeal after disfiguring gas cylinder explosion