Eight men own the same wealth as the 3.6 billion people who make up the poorest half of humanity, according to a new report published by Oxfam on Monday, January 16, to mark the annual meeting of political and business leaders in Davos. 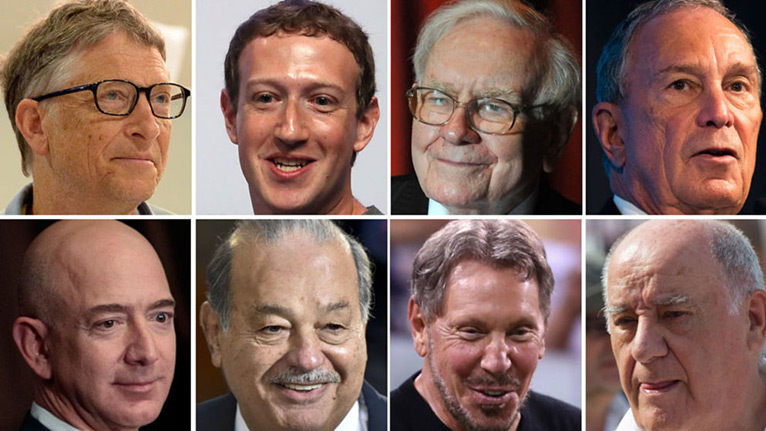 Many of those in the report have also given billions to charity.

Oxfam’s report, ‘An economy for the 99 percent’, shows that the gap between rich and poor is far greater than had been feared.

One out of nine people in the world goes to bed hungry, says the Oxfam report.

Winnie Byanyima, Executive Director of Oxfam International, said: “It is obscene for so much wealth to be held in the hands of so few when 1 in 10 people survive on less than $2 a day.  Inequality is trapping hundreds of millions in poverty; it is fracturing our societies and undermining democracy.

“Across the world, people are being left behind. Their wages are stagnating yet corporate bosses take home million dollar bonuses; their health and education services are cut while corporations and the super-rich dodge their taxes; their voices are ignored as governments sing to the tune of big business and a wealthy elite.”

Oxfam is also urging business chiefs to commit to paying a living wage and their fair share of tax.

The Oxfam report says public anger with inequality has created, and is still creating, political shockwaves across the globe.

“Inequality has been cited as a significant factor in the election of Donald Trump in the US, the election of President Duterte in the Philippines, and Brexit in the UK. Seven out of 10 people live in a country that has seen a rise in inequality in the last 30 years,” says the report.

“Governments are not helpless in the face of technological change and market forces.  If politicians stop obsessing with GDP, and focus on delivering for all their citizens and not just a wealthy few, a better future is possible for everyone,” said Oxfam Executive Director Winnie Byanyima.

The World Economic Forum has responsive and responsible leadership as its key theme this year.