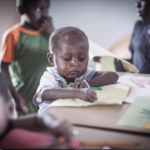 Four-year-old Amo is from the village of Asempanaye in Koforidua, Ghana. The chubby-cheeked child was of Adufah’s pupils during one of his philanthropic mission trips.

The famous photo of Amo was taken by Emmy Award winning photographer, Carlos Cortes, during one of Adufah’s art workshops while in Ghana.

Despite Amo’s photo becoming a huge internet success, Adufah expressed his disappointment of how the photo is being portrayed all over the internet on a long post on his Instagram.

“In the past several weeks I’ve been receiving emails, texts and tags to speak upon this image which has turned into an Internet meme for people to make jokes off. I wish the positive aspect of this image will go viral instead of how it’s being portrayed,” he lamented.

These sentiments that were echoed Cortes.

“Some things we can’t control. I know that. But that doesn’t mean we have to like it. This is a picture I took in West Africa. And I totally agree with @solomonadufah,” he said on a post on his Instagram.

Adufah characterized Amo as a gentle and quiet child who is always eager to learn.

To capitalise on the publicity that the youngling has gotten since his image went viral, Adufah has started an online funds drive for the student.

“I would love to help Jake in his Education as well as others who are extremely eager to learn,” he posted on the campaign page. “Let’s support Jake and many other children in the village of Asempanaye, Koforidua. Ghana. As an artist, I’m passionate about using my talent to help children.”