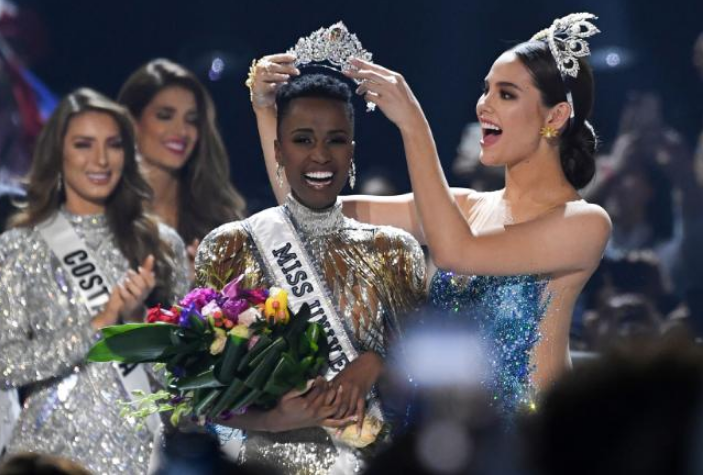 South African model Zozibini Tunzi has been crowned Miss Universe 2019 during a ceremony held at the Tyler Perry Studios in Atlanta, Georgia.

Zozibini beat off competition from 20 other contestants to emerge winner ahead of Madison Anderson from Puerto Rico and Mexico’s Sofía Aragon, who were second and third respectively.

She also became the third South African to win the coveted title, after Margaret Gardiner (1978) and Demi-Leigh Nel-Peters (2017).

Speaking at the event, Zozibini gave a powerful message to the girl child, narrating how she was never considered beautiful while growing up.

“I grew up in a world where a woman who looks like me, with my kind of skin and my kind of hair was never considered to be beautiful, and I think it is time that that stops, today. I want children to look at me and see my face, and I want them to see their faces reflected in mine,” she said.

“Tonight a door was opened and I could not be more grateful to have been the one to have walked through it. May every little girl who witnessed this moment forever believe in the power of her dreams…”

The beauty queen also stressed on the importance of empowering girls to become the leaders of tomorrow, adding that “it is something that has been lacking in young girls and women for a long time. Not because we don’t want to but because of what society has labelled women to be.”

She further stated: “I think we are the most powerful beings on the world and that we should be given every opportunity. That is what we should be teaching these young girls-to take up space. Nothing is as important as taking up space in society and cementing yourself.”

She graduated from the Cape Peninsula University of Technology with a Bachelor’s degree in Public Relations and Image Management in 2018.