Tanzanian singer Rehema Chalamila, whose stage name is Ray C, is holidaying in Kenya, and on Wednesday morning (January 3) boarded the Standard Gauge Railway passenger train from Voi to Nairobi.

Documenting her on-train experience, Ray C, who has been in Kenya since December 17, 2017, posted a picture on Instagram showing her aboard the train, and captioned the photo: “I am in my dream husband’s train! #UhuruRocks! #ThisthingisAwesome!” 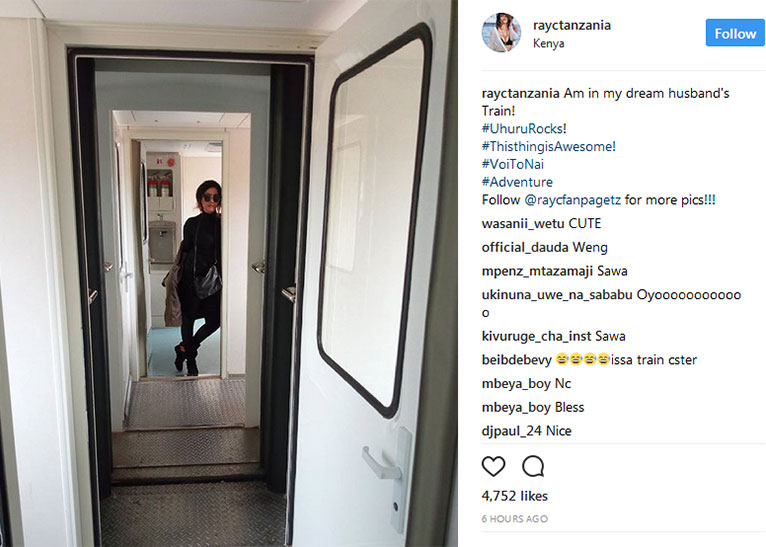 Ray C’s caption attracted mixed reactions from Kenyans, with a section treating her post lightly, while others accused her of disrespecting First Lady Margaret Kenyatta.

An irked Doreen Wanjiru wrote: “Have some manners, Ray C.”

Others, however, found nothing wrong with Ray C’s social media post.

Ray C headlined a number of shows in Kenya since touching down in late last year.

On December 23 she performed at the Homies Garden in Likoni. On December 24, she headlined a concert at Manyatta Resort in Diani. On Christmas Day, the Mama Nitilie hit-maker performed at Stardust in Malindi and on December 30, she held a show at Rosewood Hotel in Voi.

Speaking to Radio Citizen’s Mambo Mseto host, Willy M. Tuva, on April 19, 2017, Ray C said then that she hoped to meet the Head of State “soon”.

She said she wanted to have an exalting conversation with President Kenyatta.

Ray C had in July, 2015 publicly declared her love for President Kenyatta.

“During the 2013 general election, I was in Kenya and I would get impressed by Uhuru Kenyatta’s speech, his dressing, his swag. He is a cool guy. I just like him. He is a smart guy,” emphasized Ray C.

Tuva enquired from Ray C what she looked forward to, should be she accorded the chance of meeting President Kenyatta.

“I will learn as much as I can from him. I will soon request him for a dinner date, where he will advise me on matters life. We’ll say two or three things to each other. I will look for him whenever he is. He is a nice guy. I can see he supports Kenyan artists to a detailed degree. He and former Tanzanian President Jakaya Kikwete impress me,” said Ray C.