The Miss Tourism models had arrived in Vihiga County last Friday and were received by Vihiga First Lady Elizabeth Akaranga at the County headquarters offices. 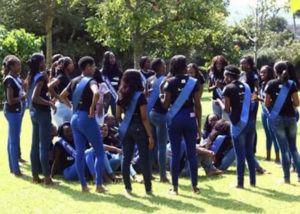 Miss Tourism models were invited to Governor Moses Akaranga’s residence, where they were addressed by the county executive PHOTO/COURTESY

The models were later invited to Governor Moses Akaranga’s residence, where they were addressed by the county executive.

The models on Tuesday toured among other unique spots, Wegevere Rocks – rocks that are believed to have the footprints of Jesus.

The event will end on Saturday, June 18, when Miss Tourism Kenya 2016 will be crowned.

On Thursday, a cultural expo was held at the Vihiga Municipal Grounds, where different Kenyan communities showcased their unique cultural artifacts, delicacies, body painting, among other products.

“My name is Lucas Karuga. I come from Kiambu County. I have come to showcase aspects of our culture such as the nguyo attire which is worn during weddings and ruracio (dowry payment),” said a participant of the cultural expo. 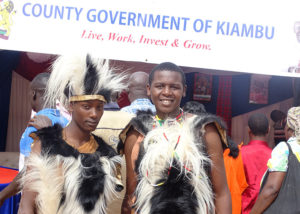 “My name is Jane Jillo, the principal officer tourism, Marsabit County. I have smeared red ochre on my body because it is a unique cultural item in Marsabit. We have 14 communities in Marsabit – the Samburu, the Rendile and the El Molo apply red ochre to make them look more beautiful. The red ochre is made of special soil. The ochre is applied mostly during special ceremonies such as weddings,” said another participant of the cultural expo, Thursday. 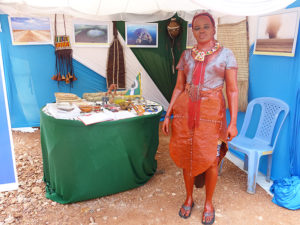 The cultural expo was presided over by Vihiga Governor Moses Akaranga.

The KSh100 million Miss Tourism event has attracted over 5,000 delegates from across Kenya and the East Africa region.

The proceeds from the event will significantly benefit the county government of Vihiga, says Elizabeth who is the Miss Tourism patron.

2016 Miss Tourism pageant is themed: “Exploring our Cultural Heritage for Social and Economic Development of our People.”

The beauty queens from across the 47 counties were flagged off by Nairobi County Deputy Governor Jonathan Mueke, and left for Vihiga from Nairobi Friday.

Mr Mueke urged the models to use their positions to preach peace in their respective counties of representation, especially during this delicate time when the general election is fast approaching.

“As young ladies, identify your areas of interest and advocate for your cause. It could be health, environment, peace, talent or disability. Next year (2017) being an election year, you must be peace ambassador to the youth who look up to you in your counties and the greater Kenya,” the Deputy Governor told the models.

Commending 2015 Miss Tourism Kenya, who hailed from Baringo County, Mueke urged the model who will be announced winner to follow in the footsteps of Jacqueline Jeruto Komen, who put Kenya on a continental map in last year’s global Miss Tourism pageantry.

“Last year, the reigning Miss Tourism Kenya from Baringo County represented the country well in Malaysia and was crowned Miss Tourism Africa. I would like to urge the models going for the Miss Tourism Kenya to impress upon the world on the wonders that Kenya and Counties have to offer the world,” said Mr Mueke.

Miss Tourism Kenya 2016 is being held at Vihiga Municipal Grounds and Kidundu stadium.