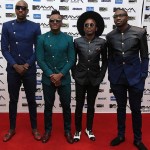 The group managed to defeat other groups in the category, including acclaimed Nigeria’s R&B duo, Psquare.

Cedric Kadenyi (Cedo) who is affiliated to the boy band also won the Producer of The Year award for their mega-hit Sura Yako.

The ceremony, which was hosted by renowned hype man Davidson Ngibuini aka DNG alongside sultry actress and TV host, Aurelie Eliam Was held at Eko Hotel, Victoria Island on Sunday night.

The occasion, which promised nothing but a musical jamboree and a celebration of African cultures, talents and artistic values delivered exactly that.

In last year’s edition, the Nigerian artistes took home the highest number of trophies, 13 in total, with the Aye crooner, Davido, carting away four of the coveted gold-plated AFRIMMA trophies.

In this year’s awards, Diamond Platnumz was the biggest winner, scooping Song of the year, Best East African Male Artiste and Artiste of the year awards.

Best African Collaboration went to AKA Ft Burna Boy and Da Les All eyes on me.

Other artistes in Africa who also managed to scoop awards include:

The Lifetime Achievement Award was awarded to the phenomenal Ladysmith Black Mambazo and the Best Male Artiste in African Inspirational Music Darey.

Other categories included the Best African Jazz, which was scooped by Kunle Ayo

Stonebwo and Revelation of the African Continent Adekunle Gold

This year’s winners being awarded with a 23.9-karat gold-plated drum and microphone- shaped trophy.