Outgoing US President Barack Obama bade farewell to Americans on Tuesday at a star-studded event held at M.C. Cormick place convention center in Chicago, delivering a speech that left his audience in tears.

As the cameras panned across the audience, one could spot First Lady Michelle Obama and her eldest daughter, Malia – both of whom were overwhelmed by emotion during the function. 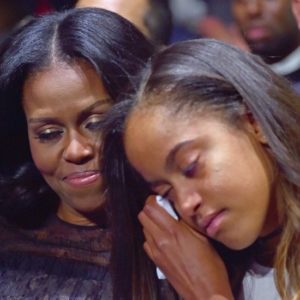 Oddly, the youngest of the Obamas, Sasha, was not present during her dad’s last major address as Head of State.

One curious TV Presenter, Jimmy Fallon, quizzed Michelle about Sasha’s absence, and Mrs Obama answered in the way that only a true mom would.

“She had a final,” Michelle said, joking: “And it’s like, ‘You know the Obamas, girl. Sorry! You have to take your test. You can say goodbye later,” Michelle said.

Well, there you have it: no special favours, even if your father happens to be the leader of the free world.

You can watch the interview here: