Residents of Karachi, Pakistan’s largest city, watched as cattle were lowered by crane from the top of a four-storey home ahead of the Muslim festival Eid al-Adha.

Unlike other Muslims who buy animals for slaughter a few days before the sacrificial holiday, Syed Ejaz Ahmad, 55, said raising his own calves was more economical. 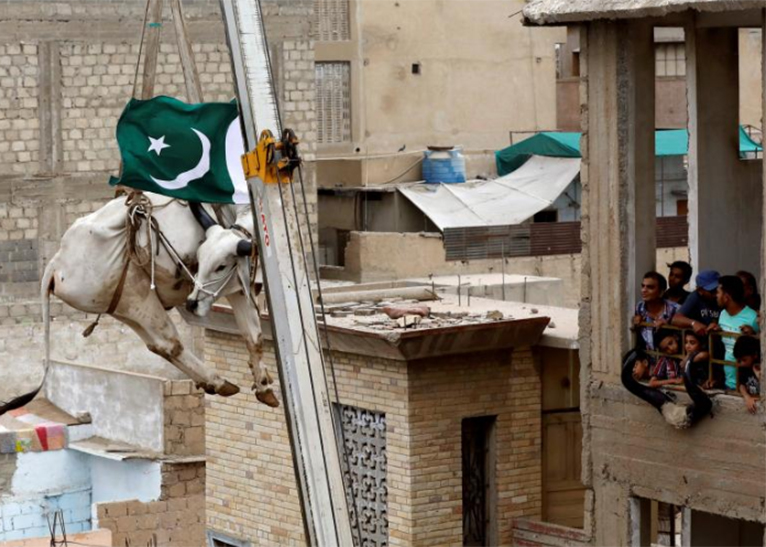 Residents watch as a sacrificial cow is lowered from a rooftop by crane, ahead of the Eid al-Adha festival in Karachi, Pakistan, August 12, 2018. [PHOTO | COURTESY]

Ahmad started raising calves in a rooftop shed about 15 years ago. As they grew in size, it became difficult to lead oxen down the narrow staircase of his house. His solution? Call a crane service.

The operation has become an annual event in Ahmad’s neighborhood of Nazimabad, where a crowd cheered as it watched the spectacle unfold.

“I was a bit scared when I did this for the first time,” crane operator Mohammad Hanif said this week as he swung Ahmad’s seven cows and oxen to the ground.

“When the animal’s feet struggled, I thought it might break the straps and fall on the crowd of people, particularly children,” he said. “Now I have a lot of practice doing it.”

Eid al-Adha is one of the two most important festivals of the Islamic calendar and commemorates the willingness of Ibrahim, or Abraham, to sacrifice his son on God’s command.

Muslims mark the holiday by slaughtering animals such as sheep and goats and sharing the meat with family and friends, as well as donating it to the poor.