American rapper Rick Ross has called out a Kenyan Twitter user, who criticised him for allegedly making immoderate demands before he accepts to perform in Kenya on April 28.

Rumours of Rick Ross’ demands, which would gobble up millions of shillings should they be met, first surfaced on a local blog, which claimed the BMF star demanded – before the concert –, a helicopter, 3, 500 bottles of premium alcohol, three floors of a 5-star hotel, a shutdown of two major roads in Nairobi – Mombasa and Langata Road, 30 air tickets; with ten of them being First Class tickets, four vans whose windows are fully tinted and 1, 500 new white towels, among others.

Organisers of the Rick Ross concert have since clarified that the demands list, which is doing the rounds on social media, is fake.

Despite the clarification being issued, a section of online users still believe that the ‘Florida Boy’ hit-maker indeed made those demands.

A Twitter user going by the name DJ PSKRATCH went ahead to directly ask Rick Ross about the rumoured list.

He tweeted Tuesday: “@RickRoss you are not the president. Your demands are too high, but make sure you live up to our expectations coz if you don’t, @Khaligraph will tear you apart.”

A seemingly infuriated Rick Ross responded to the user, saying: “@PSKRATCH1, you sound just as stupid as whoever told your stupid [expletive] those false demands. #Kenya.” 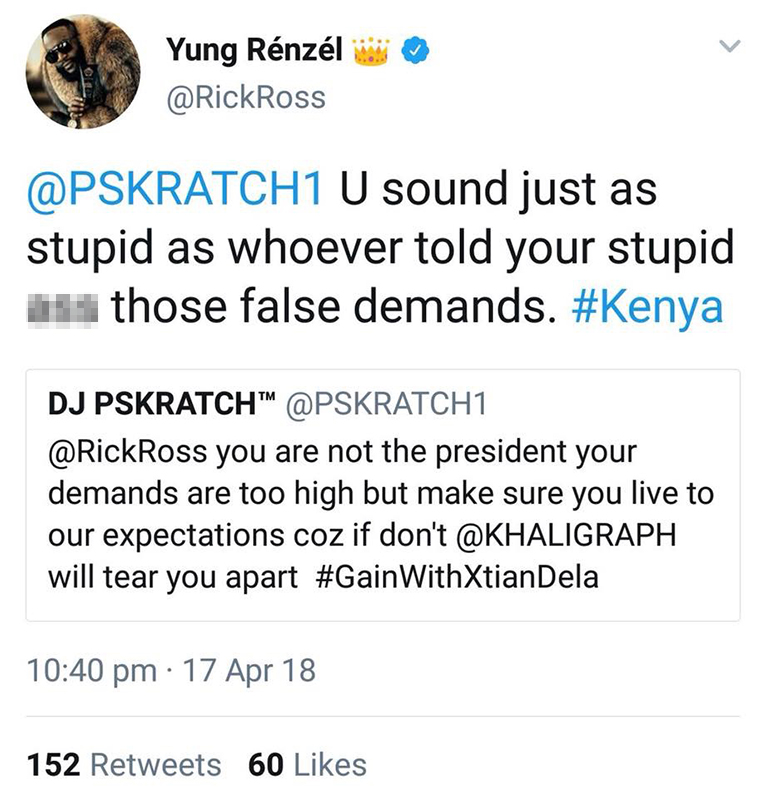 Following the claims, Rick Ross became a top trend on Twitter, only second to #IEBC, on Wednesday afternoon. Kenyans on Twitter debated about the now famous Rick Ross’ list of demands.

Rick Ross will perform at Carnivore Grounds in Nairobi on April 28.