The (in)famous ‘Human Ken Doll’ Rodrigo Alves has had four of his ribs removed just so he can fit into his tight blazers.

In an interview with This Morning T.V show, Rodrigo said that he underwent the procedure so that he could fit into his blazers without necessarily having to take them to the tailor.

“’I have had to do this so I don’t have to get my blazers refitted as they were all too tight. Now they all fit again and my tailor will be out of a job,” Rodrigo revealed to the shocked T.V show hosts. He showed up to the interview carrying a jar containing his removed ribs.

The delicate procedure was performed by Dr. Michael K Obeng and Rodrigo revealed he had to do a great deal of research before finally going under the knife.

“It can be dangerous for your organs. I had the 11th and 12th ribs removed and there is not much use for them. They did not cut too close to the spine.” added Rodrigo.

According to Rodrigo, the procedure is common in Hollywood – especially among women – but no one openly talks about it, hence why he decided to come out and discuss it.

He also added that he wanted to remove six ribs, but no doctor was willing to go that far with him.

Rodrigo became a celebrity after he underwent 60 plastic surgeries and 103 cosmetic procedures, which earned him the nickname ‘The Human Ken doll’.

In addition, he has had 10 nose jobs, a butt lift, silicon chest implants, 8-pack abs and hair implants in order to achieve his dream of becoming the perfect human doll.

While growing up, the controversial personality expressed how he was often disturbed by his looks; which is why he decided to change them through plastic surgery.

To date, Rodrigo has spent a close total of Ksh72, 960,366 on the various procedures he has undergone.

His obsession for plastic surgery has drawn both positive and negative criticism, with some people claiming that he is driven by satanic actions. 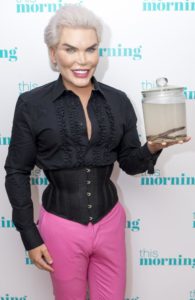 ‘Human Ken Doll’ Rodrigo Alves with the jar containing his removed ribs when he appeared on ‘This Morning’ T.V show.