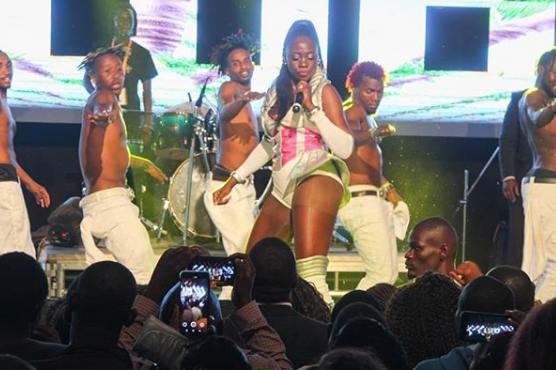 Nelson Oyugi, commonly referred to as Nelly Oaks, who is the manager to popular Kenyan songstress Akothee has come out to reveal what led to the singer’s collapse on stage during the recent Luo Festival in Kisumu.

Akothee, in a now viral video, is seen performing her popular song ‘Rollam’ before leaning back in a manner suggesting she was falling, forcing her dancers to swiftly spring to action and grab her before she hit the ground.

According to Mr. Oyugi, who spoke to Radio Citizen’s Mambo Mseto show on phone on Monday, Akothee – real name Esther Akoth – collapsed due to fatigue.

He added that the singer was immediately rushed to hospital and will now be on bed rest for at least two weeks on the recommendation of doctors.

“Her recent tours seem to have caused her burnout, although she did not show any signs of tiredness before the event. What happens is that those changes, including the time zones, come to affect the body especially when you are not taking the right vitamins,” he said.

He further refuted speculation on social media that the outspoken singer could be pregnant or suffering from some illness.

“It is purely fatigue because Akothee usually gives her all during performances. She had moved on with her performance for close to 45 minutes and it is during the last 30 seconds that she fell down, any other rumors should be strongly ignored.”

Mr. Oyugi also dismissed reports that he is dating the singer, saying; “We are very good friends and very good at what we do in business. Anything apart from that is just public imagination.”