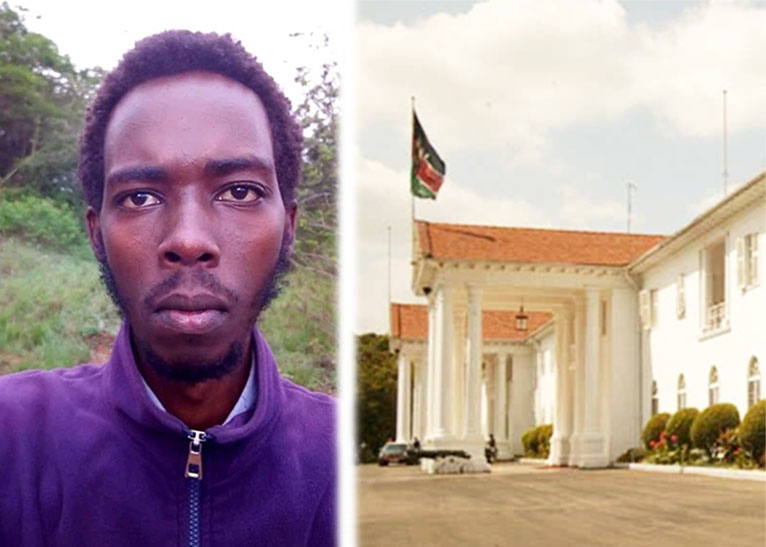 According to Bera’s acquaintance, a Third Year Second Semester student at Jomo Kenyatta University of Agriculture and Technology (JKUAT), the suspect vowed to gain forceful entry into State House by Saturday, June 15 with an aim of “harming the president”.

The informant, whom we won’t publish his name for the sake of his security, said he did not buy into Bera’s suggestion, when he [Bera] tried recruiting him in the plot.

“Last Saturday, I met Bera at Hall Seven in JKUAT, where he had gone to access the WI-FI. He introduced himself to me, and started a conversation about Kenya’s leadership. He said he felt oppressed by the current regime, which, according to him, has done nothing to ensure his forefathers’ ‘stolen’ land in Mt. Elgon is restored to them,” said our source.

“It is during that conversation that he vowed to avenge the said-oppression, saying he recently dreamt about harming the president. Bera walks around with a kitchen knife, which he says he uses to protect himself.

“It was during his narration that he said by the end of one week, beginning June 9, he would have invaded State House, Nairobi armed with his kitchen knife. He even asked me to accompany him, but I immediately told him off against that plot,” said the informant, adding: “I did not know he was serious with the plan. According to me, it looked like one of those fantasy talks people often hold.”

The source claims that Bera said “God directed him to exercise the calling”.

The informant introduced us into the troubled world of the engineering student. Bera, according to the source, is the first born in his family.

The informant said Bera recently narrated to him how he [Bera] fell out with his parents over his “radical” thoughts.

“He told me that he was purged from a family WhatsApp group after he informed them that he dislikes the current and previous leaders,” said the source.

Our informer tells us that Bera’s parents even tried getting him medical help, but he managed to escape before he could be attended to by doctors.

According to our tipster, Bera believes life in its indigenous state – without formal education – was way better than how it is now.

“He believes his sole route to wealth is pastoralism, and that his land back in Mt. Elgon, where his Sabaot community lives, was taken away by previous leaderships, and that President Kenyatta has done nothing to ensure the land is given back to them,” said the source.

“He doesn’t subscribe to the doctrines of formal education, at all. In fact, he says ‘education is meaningless’. His belief shocks me, given he always excelled in his studies from primary to secondary school, and now university.”

The informant further told us that upon falling out with his parents over his undesired ideology, Bera tried to travel to Mombasa by pleading for a lift on Mombasa-bound vehicles, but his journey did not go beyond Athi River.

“He ran out of money, and had to ask his parents to offer him financial assistance, a request his mum and dad heeded,” said the source.

“It was after his return, that I met him at Hall Seven, and struck a conversation with him.

“I even visited him at his house in Juja, which is 200 meters away from the university’s old Gate B. He lives in such a lamentable condition – he has only a mattress and honey in the house,” said the source.

The source further told us that the suspect refers to himself as “The Prince of Ethiopia” because he believes it is only in Ethiopia where he can get virgin women to marry.

“Bera claims he is a religious purist, believing should he get intimate with a woman, then the woman must be a virgin – and that, to him, there is a lot of immorality in Kenya. He, therefore, says it is only in Ethiopia where he can get virgin women to marry,” said the source, adding: “That is why he refers to himself as The Prince of Ethiopia.”

Police officers manning State House, Nairobi were on Monday forced to shoot at Bera, who attempted to access the president’s official residence wielding a kitchen knife.

Bera was shot in his left shoulder, and is receiving treatment at the Kenyatta National Hospital.

Muchiri said the officers, who challenged Bera as he attempted forced entry, did not kill him because he appeared mentally unfit.

State House spokesperson, Kanze Dena-Mararo, also confirmed the incident, saying the student was booked at Kileleshwa Police Station before being taken to hospital.