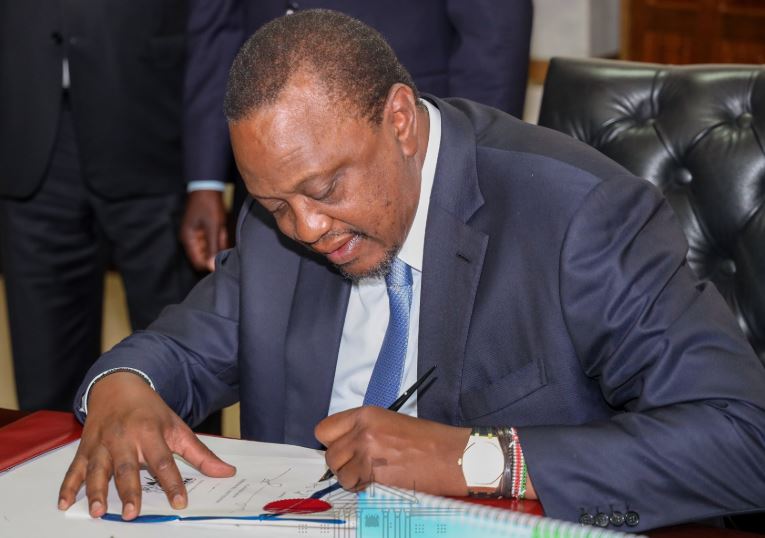 The Copyright (Amendment) Act 2019 is aimed at addressing growing concerns about royalty rights in the country especially the collection and disbursement of fees and due to copyright holders.

It was published by National Assembly Majority Leader Aden Duale on September 18, 2017 and sent to the Senate in July 2018.

It was however prioritized for consideration after Kenyan musicians made their request to President Kenyatta during the burial of the late musician John Nganga De’Mathew on August 24, 2019.

President Kenyatta appending his signature to the Bill now comes at an opportune time following uproar from Kenyan musicians about being shortchanged by Collective Management Organisations (CMOs).

This comes after artists condemned the Music Copyright Society of Kenya (MCSK) after they were sent Ksh.2,500 each as royalties for two months.

Following the cry, the Head of State – speaking while addressing mourners at DeMathew’s funeral – announced that the Kenya Copyright Board would be moved from the Office of the Attorney General to the Ministry of ICT as part of measures to protect musicians from exploitation.

The President said the right home ministry for the copyright board is ICT because that is where it can have the ability to monitor broadcasters, telecoms and other entities that use productions by artistes.

“I have instructed the ICT Ministry to ensure that before renewal of licenses for broadcasters and telecoms they must pay what they owe artistes,” said the President.

The President also said he had instructed the Directorate of Criminal Investigations to probe organisations that collect money on behalf of musicians to see if they are embezzling what they collect.

“The music industry has a problem that needs to be fixed. Recently we were told that an organisation collected around Ksh.200 million on behalf of musicians and then claimed that they spent 60 percent of that money as expenses for the collection,” he added.