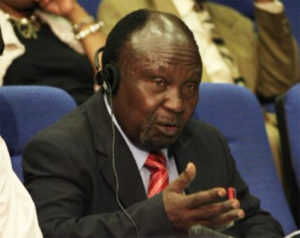 Mark Mwithaga passed away on Monday, August 1 after he was admitted at a Nairobi hospital in critical condition PHOTO/RAO.CO.KE

Mr Mwithaga passed away on Monday, August 1 after he was admitted at a Nairobi hospital in critical condition.

“Mama Ida Odinga and I wish to pass very sincere condolences to the family and friends of Hon Mark Mwithaga who passed on yesterday (Monday) after a distinguished public and private life marked with sacrifice, pain, betrayal and triumphs,” reads Raila Odinga’s statement published on his official website rao.co.ke Tuesday.

“He leaves behind a legacy that will forever remain the tale of what has been wrong with our country, and the titanic battles it has taken to get it in the right direction,” adds Odinga’s statement.

The CORD leader eulogized Reina’s dad as a fearless public servant who sacrificed selflessly for the good of society.

“Identified by the Kanu regime as a “rebel” in the 1970s, Hon Mwithaga, who was the MP for Nakuru Town was removed from his post after an election petition that was clearly manipulated. When the government realized that he was going to contest in the by election and was projected to win, it revived an old case in which he had been accused of breaking a door to his own house during an alleged domestic disagreement five years earlier,” wrote Raila.

“The truth was that the door had been broken by the police in their attempt to find seditious material in Mwithaga’s house. Mwithaga was quickly arraigned before court and charged with assault and malicious damage to property.”

Raila went on to blame the government of interference, saying they refused to terminate the case – even after his wife refuted the allegations.

“Hon Mwithaga was however an inspiration to many and we take comfort in the fact that he leaves behind a better country than the one he grew up in. Ours is to ensure there shall be no reversal of the gains even as we remain well aware that the forces for reversal lurk at every corner. We wish God’s blessings to the family he leaves behind.”

Singer Reina, born Grace Wakiuru, announced the passing on of her father to friends and followers on Facebook Tuesday.

She first wrote: “Hi my people kindly keep my family and I in your prayers tonight. My dad is critically ill.”

Two hours later, she updated her fans with the heartbreaking news: “Thank you all for your prayers but my dad has just passed on #RIP dad.”

Reina received Raila Odinga’s condolences. She wrote: “Thank you Raila Odinga for your kind words sir. My family and I are humbled.”

eDaily extends heartfelt sympathies and condolences to Reina and family.