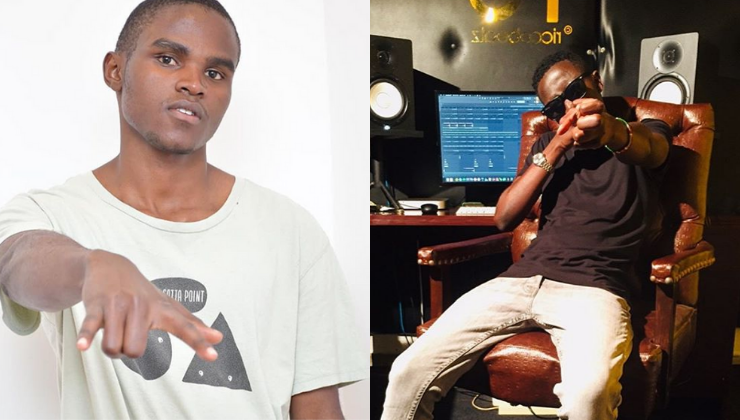 A battle is brewing in the music industry pitting renowned producer Riccobeatz and upcoming musician Cliff Nic MC on one side and ‘Takataka’ hitmaker Alvindo on the other side over a song titled ‘Boychild.’

A quick search on YouTube shows that the ‘Boychild’ song by Alvindo featuring producer Magix Enga was uploaded on Magix Enga’s channel on Saturday May 4, 2019.

Barely a day later, Riccobeatz uploaded a song with a similar title on his YouTube channel by Cliff Nic MC featuring Alvindo.

Despite the time difference in release of the song, the lyrics to both versions have an uncanny similarity that is difficult to ignore.

Speaking to EDAILY, Riccobeatz says the version uploaded on his channel is the original song, further accusing Alvindo of stealing the concept and rushing to release it in another studio.

According to the ‘Mazishi’ hitmaker, the song belongs to Cliff who approached him and he agreed to produce and sponsor the audio which was recorded at his studio – 808 Records – as well as two other singles by Alvindo.

“Cliff wrote the entire song, Alvindo was just featured in it. We had even set a date for shooting the video, only to later come to realize that he went and did it with someone else,” says Riccobeatz.

“I think he was under pressure from his management to release another hit. After ‘Takataka’, he released a song titled ‘Kunguni’ which did not perform well and so maybe after recording ‘Boychild with us and seeing the potential in it, he decided to take it back to his stable where they quickly recorded and released it.”

Alvindo, on his part, dismisses this as ‘upuzi’ (nonsense) saying he has as much ownership to the song as Cliff or Riccobeatz.

The fast-rising musician, however, acknowledges that the version uploaded by Riccobeatz was indeed the original one adding that he consulted Cliff before recording the second version with Magix Enga and he (Cliff) gave him the go-ahead.

“Cliff is still an upcoming artist, so collaborating with him was just to help him gain some spotlight. But then I saw it wise to record another version with Magix Enga because he’s already a big name,” says Alvindo.

Cliff, however, rubbishes any claims that he gave Alvindo the green light to record and release the song elsewhere, adding that he (Alvindo) contacted him to request if he could use some of his lyrics from the original song but he (Cliff) refused.

“After that he went offline and the next thing I saw was Magix Enga promoting their song. I confronted him (Magix) on Instagram and he blocked me, I haven’t heard from them since. Until about the other day when Alvindo texted me saying he was sorry and that he would split the cash with me,” says Cliff.

“The song is mine. I actually uploaded the very first version on YouTube about two months ago, and it’s still there, the one I featured Alvindo in and that was produce by Riccobeatz is actually a remix. But everything about ‘Boychild’ is mine. Alvindo and I come from the same hood, he heard the first version and asked if he could feature in a remix and I accepted, I even gave him the entire concept for his verse on the song.”

This is the day we were recording my song with alvindo at riccobeatz.soo he decided to doo things behind my back and stealing my song and reacoding it again with magix enga.kweli wasani hana content.hao ni makunguni

Now, ladies and gentlemen, below is the version of ‘Boychild’ as produced by Riccobeatz, recorded by Cliff featuring Alvindo:

And here is the version by Alvindo featuring Magix Enga:

Then here is the one done 2 months ago by Cliff:

Compare, contrast, and be the jury.