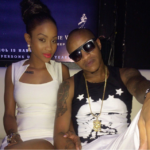 CMB Prezzo’s new fiancé Mitchel Oyola has come out to defend her ‘bad boy’ boo over allegations of drug abuse following yet another embarrassing TV interview.

In an exclusive interview with Tanzania’s Showbiz reporter Sam Misago, the striking model went on to say that she has never seen her lover use hard drugs.

“I have never seen him use hard drugs before. He uses alcoholic beverages and smokes cigarettes. The most have seen him use is weed occasionally,” she said.

Her statement corroborates the words of the Naleta Action singer, just days before.

“I do not use hard drugs even God is my witness…They say he has lost weight because he uses hard drugs,” the controversial rapper told Tanzania’s Cloud FM.

CMB Prezzo had earlier proposed to his flame, Mitchel Oyola and went ahead to post a picture on Instagram Thursday, May 19th after information was leaked on social media.

Rumors of Prezzo’s alleged drug abuse have been around for some time, but they were reignited after he appeared inebriated on KTN’s Friday briefing.

Prezzo – who is currently headlining shows in the neighboring Tanzania – slurred his speech when responding to Mr Ayo’s questions.

In a 13-minute back seat interview video posted by Millard Ayo on YouTube, Prezzo can be seen mumbling and struggling to sit upright in the car.

After fumbling another TV interview CMB Prezzo Mitchel Oyola Prezzo’s girlfriend opens up on drug use.