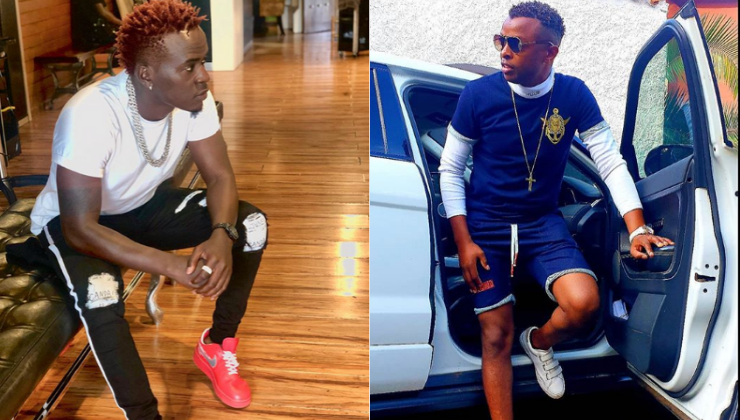 Kenyan musicians Willy Paul and Ringtone on Friday entered the second day of their online war following the release of the former’s latest song ‘Nikune’.

Ringtone, in an Instagram post, termed the song – in which Willy Paul features songstress Nadia Mukami – as “stupid, evil, and devilish.”

Ringtone poured scorn on Willy Paul saying the Gospel industry has been angered by his music, also criticizing Nadia Mukami for her part in the song intimating that her fans are disappointed.

Ringtone further called on Kenya Film Classification Board (KFCB) boss and self-proclaimed moral police Ezekiel Mutua to ban the song for what he termed as bad content.

“Ezekiel Mutua, I just want to tell you, people may not like you, but you’re doing a good job. Please do us a favour, you need to ban all the songs that have bad content….kama hii song ya Willy Paul na Nadia Mukami, naomba uiban,” he stated.

Willy Paul, in response, urged Ringtone to concentrate on his own music as ‘Nikune’ was trending at number two in the country as at the time of the squabble.

The controversial singer also told off Ringtone saying he (Ringtone) was not mentally stable and that he needed God’s forgiveness.

“Where is ringtone? Where is that woman?? Look at my YouTube channel, look at the song…look at the trend!! N***a pick ur fights carefully. Kuna watu hapa bado hauezani nao.. I’ve decided to give you the fame you’ve always wanted so bad,” he wrote back.

“Ringtone please leave me alone…why are you against kila kitu nafanya? Before Ezekiel Mutua ban me, he should ban ur mouth and dirty heart!!… you need to see a doctor…sio kawaida mtu kuwa hivi…”

Guys, I'm I the only artist in Kenya?? Ringtone please leave me alone.. why are you against kila kitu nafanya? Before Ezekiel mutua ban me, he should ban ur mouth and dirty heart!! What's dirty in this song?? #nikune?? Najua unaipenda unaitaka pia n that's why nimeiongezea kwa hii video yako… you need to see a doctor.. sio kawaida mtu kuwa hivi #nikune is already ‘’ A ‘’ people's choice.. toa yako ya gospel. Yesu akune sins zako basi akusamehe!! Ur not okay mentally