Kidero was headed to the CBD from Umoja where he had presided over a function. On his way, he saw Jaro Soja and other supporters of the green army headed to Nyayo Stadium from Eastlands. Jaro, who was riding his motorbike, was leading the pack.

Kidero stopped his convoy, came out of his car, greeted the Gor fans and rode on Jaro Soja’s motorbike for a considerable distance.

Elated Jaro Soja narrated to eDaily the happening, which he says he will not forget easily.

“I have a very big motorbike similar to police motorcycle escort. A friend of mine called Dave Kalo owns a white saloon car. He came to pick me at my house so that we could go watch the match between Gor Mahia and Tusker FC at Nyayo Stadium. I had implanted Gor Sirkal’s flag on the car’s bonnet.”

“I went ahead of Kalo’s car with my motorbike as I led Gor fans. When we reached Jogoo Road – just past Makongeni – I saw a Land Rover with policemen on board. It passed us at a supersonic speed. A few minutes later, I heard an approaching car siren getting louder.” 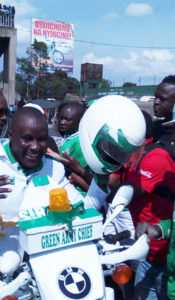 “Some county officials then asked me to put my motorbike aside. Kidero had already spotted me and alerted his convoy to stop. He then came out of his big car and told me: ‘Jaro you see I have come to say hi to you. I just had to greet the commander of the green army. I respect you very much.’”

“He sat on the pillion and asked me to ride with him as his convoy followed from behind. Kidero’s supporters thronged the roadsides and were repeatedly chanting his name. After riding for a short distance, he went back to his car. But he told me to book an appointment with him so that I can take the pikipiki to him. Kidero is a good friend of mine. He appreciates me.” 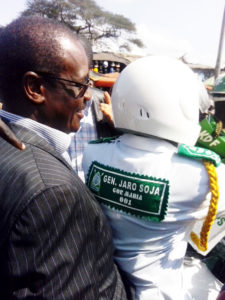 Gor Mahia beat Tusker 1-0 to make it to the final on a 3-0 goal aggregate. K’Ogalo will face Muhoroni Youth in the Top-8 tournament final.

Muhoroni stunned Ulinzi Stars in their semi-finals meeting at Nyayo Stadium on Sunday to storm the final of the knockout tournament.