A man wearing a Gor Mahia jersey is jazzing up the Internet after screen grabs of him went viral on Facebook.

The man’s photos have been shared by the Montgomery County Police Department, a Police Unit in the United States, and he is being accused of being behind a string of bank robberies in Montgomery, Alabama.

What has caught the eye of many, however, is the fact that the bespectacled man is wearing a Gor Mahia jersey… in the United States!

According to the post shared on Facebook on the Police Department’s official page, the man is behind two robberies that occurred at the PNC Bank located inside of the Giant Food grocery store at 2900 University Boulevard West in Wheaton.

Detectives are Investigating an April 13, 2018 and a November 14, 2017 bank robbery that occurred at the PNC Bank located inside of the Giant Food grocery store at 2900 University Boulevard West in Wheaton. Investigators believe that these two bank robberies were committed by the same suspect’, Part of the Facebook post read.

Now, cheeky Kenyans have camped on the Facebook page’s post and are now trolling the Police Department with Gor mahia-related jokes and jabs.

Shall we say, Kenya to the World?? Haha 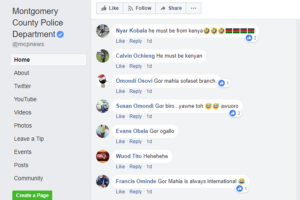