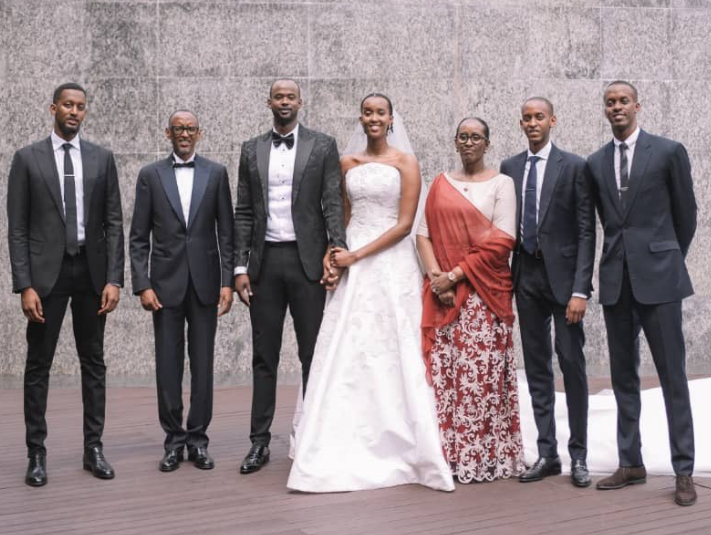 At 6 feet and 2 inches, Rwandan President President Paul Kagame is quite undoubtedly the tallest Head of State in the continent.

Which, in terms of leadership, should be a good thing because – according to a paper published by Dutch researcher Mark van Vugt – “taller individuals are seen as more leader-like because they are perceived as more dominant, healthy, and intelligent.”

But what happens when the tallest President in Africa turns out to be the shortest person in his own household?

You read that right; President Paul Kagame’s children, and even son-in-law Bertrand Ndengeyingoma, are all taller than him.

He, as well as his wife, may be shot callers in the family but their offspring tower way above them; in terms of height, of course.

Kagame’s daughter Ange recently married his longtime sweetheart Ndengeyingoma and when she posted the photos online, the comments were hilarious.

We know your Dad as the tallest president in Africa.
He just became the shortest between you..Waaa

Hehehehehe at my best President tall Kagame from Rwanda is the short guy in his family.I need this genes express.Congratulations on your daughters wedding.

Can’t believe you guys are taller than the president.

Man,this is a family of trees.

When your mum and dad visit Kenya they are tall…..y’all taller than them.A very hearty congratulations 🎉🎊🍾 to your union.

No shortcomings in this family

When President Kagame is in Kenya, he is tall, in Rwanda he is short, need to come to Rwanda to witness the miracle.

You guys want to beat the Guinness book of records taller than the president?? Yet the president is the tallest among his peers am surprised