Opposition leader Raila Odinga on Tuesday, March 28, became the latest victim of fake news, when he responded to a fake letter, which claimed that the Kenya Wildlife Service (KWS) management has summoned Mombasa Governor Ali Hassan Joho to explain why he “refers to himself as Simba 001.”

The fake letter dated March 28 – and addressed to Governor Joho – and whose undersigned is an office holder by the name Prisca Waweru, whose title is ‘Human-Animal Conflict Resolution Manager’, read: “It has been brought to our attention that on several occasions you (Joho) have referred to yourself as Simba 001.

“We would like you to visit our offices on March 29, 2017 at 2pm and clarify how you acquired the name Simba. We look forward to your cooperation.” 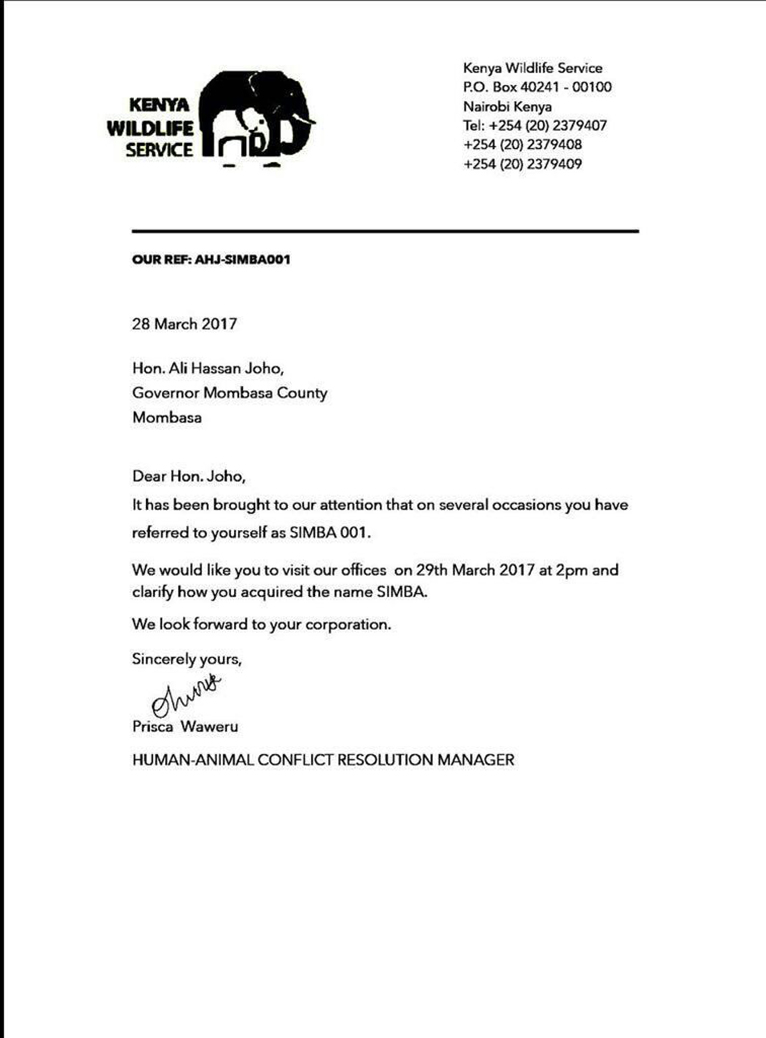 Speaking at Orange House in Nairobi on Tuesday afternoon, Raila termed the letter, which he did not know was fake, as “pure hogwash”.

It is his aide, Andrew Mondoh, who brought ‘news’ about the fake letter to Mr Odinga’s attention, who at the time was addressing Bunge la Wananchi members on NASA’s preparation ahead of August 8 poll.

“(Excuse me, Raila). There is some stupidity here. They are summoning Joho to Kenya Wildlife Service (KWS) on the 29th (of March) to explain how he acquired that name Simba, now the harassment (is getting worse),” said Mr Mondoh.

Mr Odinga immediately responded: “Hiyo ni takataka (that is rubbish),” before focusing his attention to the audience present to say: “Now, the KWS has written a letter addressed to Joho enquiring why he uses the name Simba – that Joho is Simba, he should go to KWS and explain how he got that name Simba. (Audience bursts into laughter). That is stupidity! All that shows how the Jubilee leadership has panicked ahead of the August 8 poll. We’ll continue marching forward.”

Mr Odinga, in his speech, said NASA has come up with measures to ensure that there won’t be rigging in the August 8 poll, especially for the Presidential contest.

Mr Odinga added that NASA will have nearly 450, 000 agents across the country to ensure there is transparency in voting exercise and the counting of votes.

He said NASA’s agents will relay election results from polling stations to the national tallying centre.