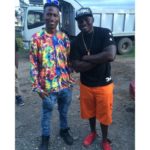 The first release off the album is a song titled Noma Ni in which the Kibera-bred rapper seemingly throws a jibe at his Kayole counterpart, Khaligraph Jones.

The line has been viewed as a direct hit to the Omollo rapper who is currently riding high with his collabo with boy band Sauti Sol titled Rewind.

When reached out for comment on his response to the perceived diss from Octopizzo, Khaligraph Jones replied to our messages with a curt, “No Comment.”

Khaligraph, only recently while on a tour in Tanzania, brushed off claims of beefing with Octopizzo saying they were not on the same level anymore.

In the interview with Clouds FM, Khaligraph said he had now “grown up” and no longer had time for beef.

The Wanjiru and Akinyi hitmaker further revealed the genesis of their beef with Octopizzo as a freestyle battle they did back in 2007 when they were both trying to make it in the game.

He added that he won the contest, which made Octopizzo “intimidated” when he started blowing up in the rap game long after Octopizzo had made it.

Below is the new Octopizzo song;