Popular coast-based singer Mwanaisha Abdalla better known as Nyota Ndogo wedded the love of her life Henning Nielson on Sunday, May 22 after two years of engagement – and the brother Juma Tutu is not impressed.

Two different ceremonies (Islamic and Swahili), were held at their home and Rosewood Hotel in Voi, Taita Taveta County. The nuptial was a two day affair with Sunday culminating the event.

The relationship between Nyota and Henning was and is still being vehemently opposed by Juma Tutu who terms Henning as “too old for Nyota”. 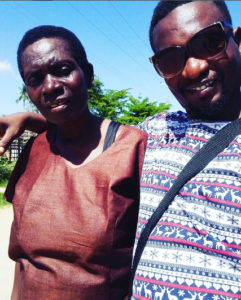 “A superstar like you (Nyota) decided to wed an old man. And then you told Tatu (Nyota and Tutu’s sister) to leave my place where I had secured her employment and come live with you. You just wanted to introduce her to old white men. Mum too has not received dowry from your man. This is nonsense,” Tatu posted on Instagram.

In yet another post, Tutu says Nyota Ndogo has turned their younger sister Tatu into a nanny.

“She has advised her (Tatu) to stop singing and wait for a mzungu ambaye anamtafutia. Hio ni haki? Why waste her talent? I would have let Nyota do whatever she wants with her own life but! Why is it that every time I try to empower a family member she keeps on destroying?” posed Tutu in a social media tirade.

eDaily reached Nyota Ndogo for comment about Juma Tutu’s claims and in a rather calm tone, she said: “Let him tarnish my name. I won’t answer him back. I have never wronged him. Everyone at home complains about him. But if that is what makes him happy, let him be.”

And about her marriage – three days on – she says all is well.

“So far so good. I know my man a great deal. I have lived with him for two years.”