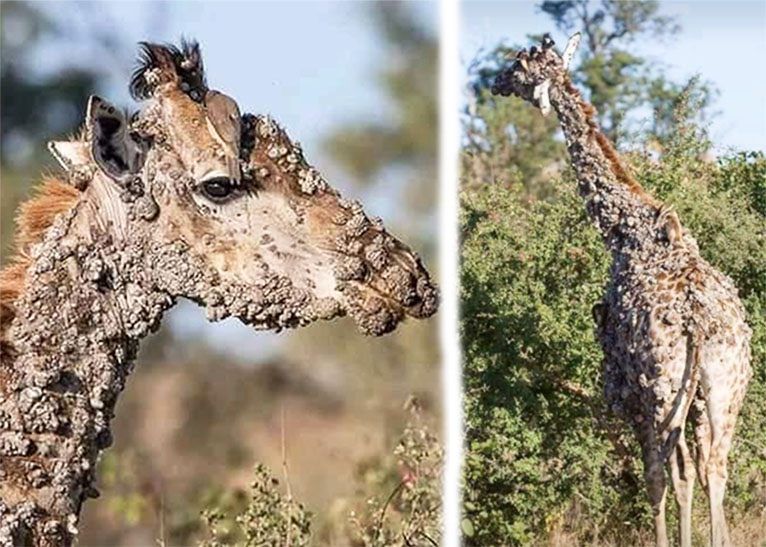 Disturbing pictures of a giraffe covered in unsightly bumps have gone viral on social media, with a section of users claiming the images were taken at Laikipia National Reserve.

Following the spread of that allegation, a section of social media users called out the Kenya Wildlife Service (KWS) for neglecting the animal’s welfare.

KWS has, however, come out to deny claims of negligence on their side, saying the pictures weren’t even captured in Kenyan borders.

“We wish to state that this photograph doing rounds on social media does not originate from Kenya as many have been led to believe. The picture was taken in Kruger National Park, South Africa. The giraffe is allegedly afflicted by a condition brought about by the Papilloma Virus. We, however, would like to thank you all for your notifications and concern,” wrote KWS on their official Facebook page on Tuesday.

EDAILY understands the first pictures of the distressed giraffe surfaced in May 2016.

The papillomavirus, which is not life threatening, tends to affect cattle, causing large irritable lesions to develop on their bodies.

The virus is thought to be spread from giraffe to giraffe, by oxpecker birds who feed on the giraffe’s ticks.

It is not thought to be life-threatening to the animals although the lesions are sometimes itchy and if persistently scratched can lead to infection.

In May 2016, tour guide Liaan Lategan told The Daily Mail that the lesions often affect the normal living of the giraffes.

“It appears to be irritating and the giraffe will often rub the affected area causing the warts to rupture and later get infected. The warts eventually harden and turn in to a type of cancer called a Sarcoid,” said Lategan.

Reports suggest there is a vaccination that can be administered on the animals to prevent the growth of such warts.