A South African restaurant, where four women incurred a Ksh282, 000 (R37, 340) bill during a night out last weekend, has issued a clarification after online reports said the women were detained for being unable to settle the bill.

Zero13 Lifestyle, a restaurant in Nelspruit, Mpumalanga, says it is true the women downed drinks worth Ksh282, 000 at the entertainment joint; and that they managed to settle the bill, contrary to viral online posts.

Zero13 Lifestyle made the clarification on its official Facebook page Tuesday, June 12.

“Zero13 would like to formally address the rumours going around on social media about ‘the bill’. The stories are completely untrue and fabricated; the bill was paid and there were no issues as implied,” said the entertainment joint in a Facebook post.

“We would like to ask people to refrain from reposting or posting these stories as they are unfounded and far from true. Zero13 would like to formally apologise for any misunderstanding arising from this incident.” 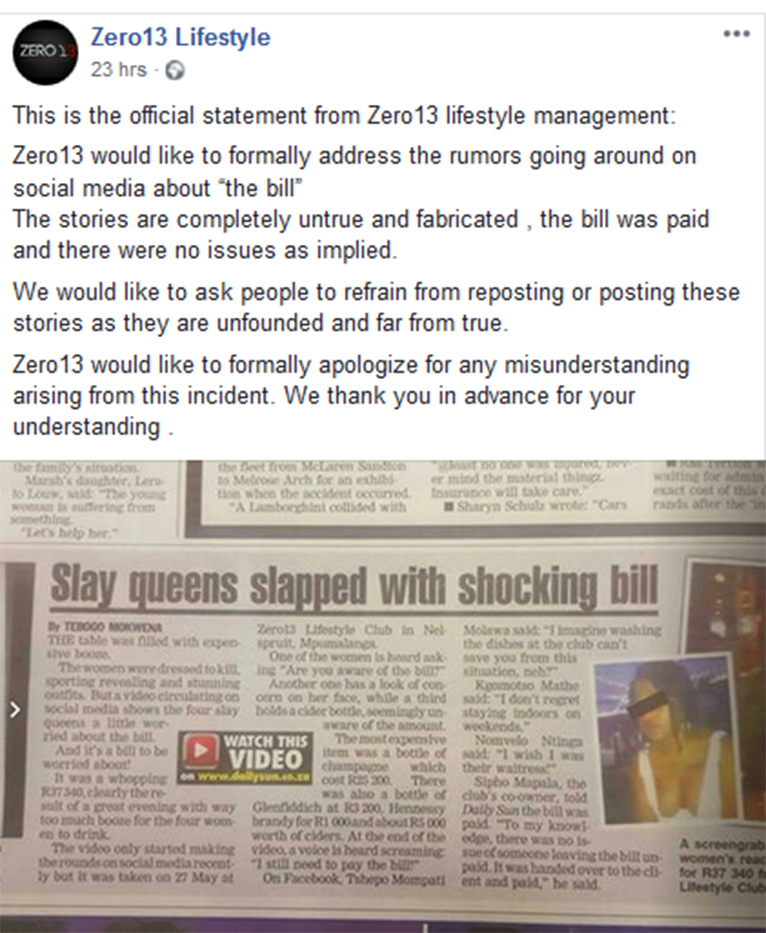 Zero13 Lifestyle restaurant’s response to claims that four women were detained at the facility after they failed to settle a Ksh282, 000 bill [PHOTO | FACEBOOK]

A video of the four women “stranded” at Zero13 Lifestyle after a man left them with the Ksh282, 000 bill went viral last weekend.

In the video, the women clutch their bags while looking around to see if their ‘sugar daddy’, who had asked them out, would reappear.

According to the bill, the four women had feasted on two platters of meat, quenched their throats with different brands of alcoholic drinks, including a bottle of Hennessy and a bottle of 18-year-old Glenfiddich Scotch whisky.

The video was first shared by a South African online user, who urged women to ensure they carry money with them anytime they are asked out by a stranger.

The story was also published in a South African daily.

Below is the viral video of the four women “stranded” at the Zero13 Lifestyle restaurant.