A woman from Lodwar, Turkana County has claimed that Jehova Wanyonyi endorsed her to replace him as the leader of the lost Israelis sect. 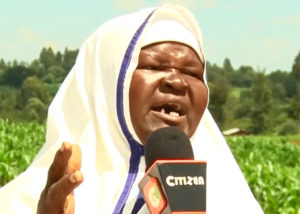 Akata also claims that Wanyonyi is still alive and he is living in the sea.

“Jehovah Wanyonyi met me in Lodwar and informed me of the restlessness among his followers. He said he’ll never come back on earth, and if anyone wants to see him, he or she should look for him on the sun or stars.”

Does this mean that Jehovah Wanyonyi will never be seen on earth again? Apparently, not.

“However, he’ll come back, alongside Jesus, on the day of Eschatology,” Akata told eDaily.

“He is currently staying in the deep sea – far away from our land. What are afloat on that sea are handcuffs, a panga, and three chains. He will use the chains to shackle evil forces that are living in the sea. There are three snakes that he’ll chain at a go; take them to Mt. Kilimanjaro and later throw them in raging fire.”

“Thereafter, Jesus will come down and take over the mantle. He cannot assume power when the snakes are still living in the sea. Being the son of God; Wanyonyi’s work has to continue on earth; and he endorsed me.”

Akata further says angel Joab, who was a staunch follower of Wanyonyi, has confirmed her status as the new god.

Sections of the Lost Israelis sect have, however, rubbished Akata’s claims, saying the said angel married the 65-year-old recently and the pair wants to mislead the public.

Many have said they won’t worship Akata – whatsoever.

He said the body was taken to a hospital in Kitale.

Wanjau said Wanyonyi was not buried at his home, near the border between Uasin Gishu and Kakamega counties.

However, mystery still surrounds the location of the grave of the 81-year-old spiritual leader.

Hundreds of followers camped at his Nangili home, which they call a shrine, demanding to know his whereabouts.

Many do not believe he is dead.