In a letter dated May 3, 2016; Dr Ayisi told Mr Mong’are that beginning May 3 he stands suspended from performing his duties as the Director of Communications in office of Nairobi Governor Dr Evans Kidero.

Dr Ayisi adds that Mong’are’s employment with the county government will be terminated on May 11, 2016 should he fail to comply with conditions that were stipulated in his letter of appointment.

“Take note that you should comply with the aforesaid letter (letter of appointment) from the board dated May 3, 2016 on or before May 11, 2016 failure to which your employment with the county government will be terminated without further reference to you. In the meantime you hereby stand suspended from your duties forthwith,” reads a paragraph in the letter. 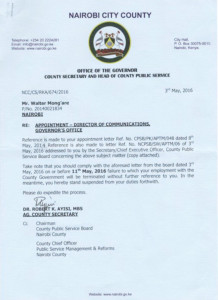 Details of what has led to Mong’are’s suspension remain scanty.

Walter Mong’are has denied receiving the letter. He says he learnt of his suspension through a tweet posted by controversial blogger Robert Alai.

Mong’are says until he formally receives his termination letter, he will continue to discharge duties inscribed in his letter of appointment.

Prior to his appointment as Nairobi County Director of Communications in May 8, 2014; Walter had served in the same capacity in Kisii County government.

The Kenyatta University alumnus revealed to Citizen Television in December, 2015 why he left Kisii County for Nairobi.

Walter revealed how the three came up with the concept which would later sweep the airwaves.

“It was one of those beautiful accidents. We were in the middle of the cultural week at Kenyatta University and the program was a little bit running behind schedule. We were short of performances and Tony then was the head of the culture centre.

“We said why don’t we do something in the mean time to close the gap as we wait for the next item; and that’s how Redkyulass came about,” recounted Walter.

The group later disbanded and Mr Mongare moved to Kiss 100 FM as comic character called Nyambane, aka Baby J Nyams, where he hosted the morning show with Caroline Mutoko.