For a long time, a highly contested debate has been raging as to whether Kenyan men are hopeless romantics or ingenious romantics when it comes to matters love and relationships.

Two men in 2016 came out to rectify a reputation of Kenyan men that has for nearly the longest time suffered ridicule, criticism and disapproval by sections.

The two – Antony Buluma Samba and Richard Bett – have proven that Kenyan men can be sweet and loving; committed and devoted without deviation – and above all, creative when it comes to making their women feel special.

On air surprise to wife

Hot 96FM Mid Morning Show presenter Monique Kabuye was left speechless on October 21 when her husband Richard Bett surprised her in the most amazing way modern-day diehard romantics would. 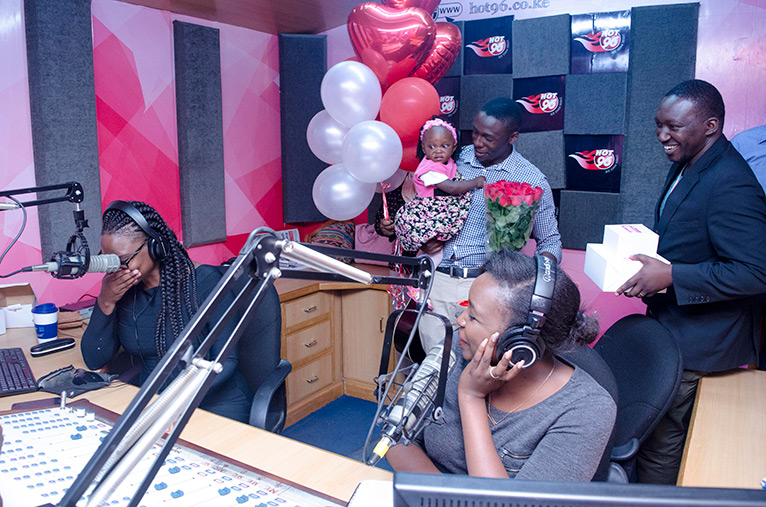 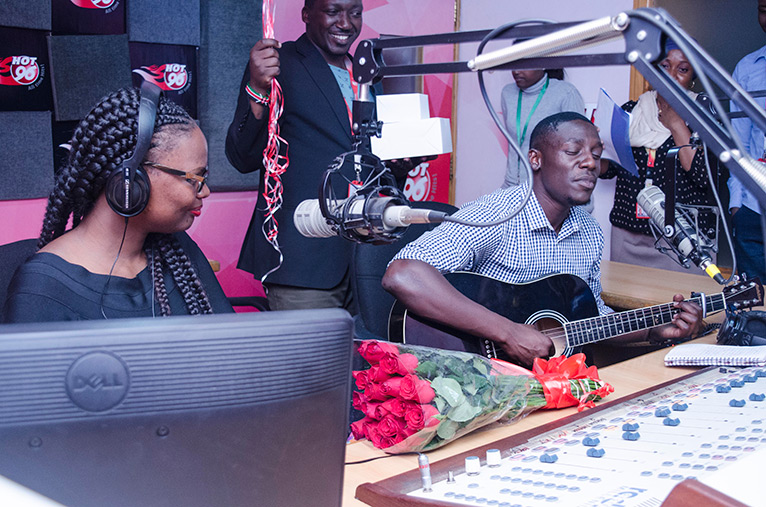 A lucky woman namely Gettie Nthiiri late November, 2016 got the surprise of her life when her partner Antony Buluma Samba dropped to one knee in the arrivals hall of the Jomo Kenyatta International Airport after flying in from an undisclosed place of origin. 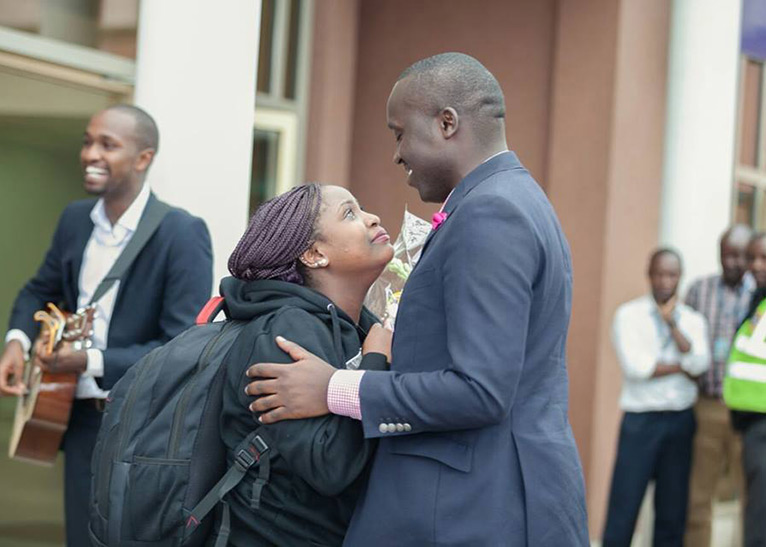 Seeing her man receive her at the airport after a moment of separation – due to distance – would have made the perfect gift for Gettie. But the surprise proposal proved more fulfilling.

A group comprising family, friends and colleagues carrying placards written: “Gettie will you marry me?” received her at the airport. She tearfully accepted the proposal from Mr Bulama, her long-time boyfriend.

Unbeknownst to Gettie, Mr Bulama – an alumnus of the United States International University –, had actually arrived at the airport Monday evening to prepare for the big moment. 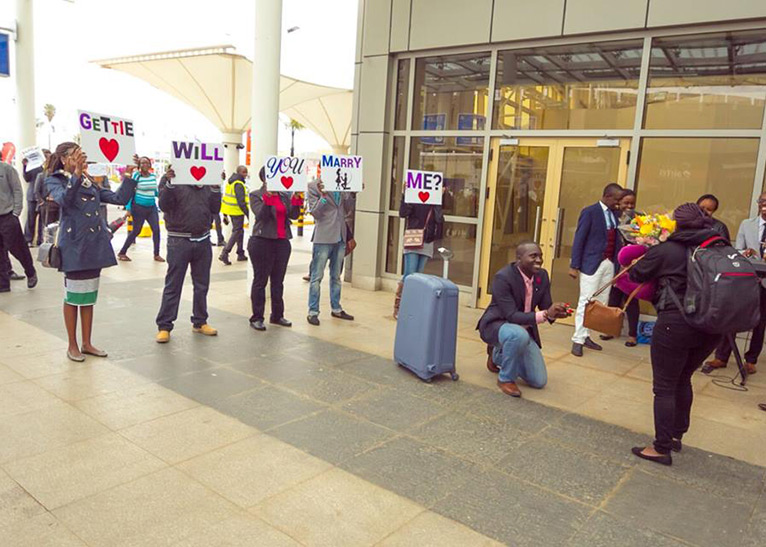 Prior to proposing, Mr Bulama patiently held a large bunch of flowers, while he waited for his partner to arrive. Spotting his other half approaching, a smile erupted on his face and he went down on his left knee, popped the question as a band equipped with a musical keyboard and a guitar serenaded her.

Heartwarming photos showed Gettie running toward her boyfriend and throwing herself into his arms.

As Gettie said ‘yes’, the assembled crowds cheered and a clatter of smartphone shutter sounds followed like a round applause.

eDaily caught up with Antony Buluma Samba who divulged exclusive details as to why he opted for the rare gesture of love.

“I think several things made me come up with the proposal plan. One, friendship gave birth to love – and you know when that happens, it ceases to be normal; it becomes something extraordinary. So, one has to go the extra mile in almost everything. What started as a friendship grew to something bigger and more beautiful that required all manner of extraordinary input,” said Antony Buluma Samba.

The couple has dated for more than two years now, and Mr Buluma shares why he chose the JKIA as the place of popping the big question to his lover.

“I chose the airport because she was arriving from a location I wouldn’t want to disclose. I felt the gesture would be a good way of receiving someone I love. I thought: why don’t I make it special? And I wanted it to be a surprise, though she is very sharp – and she knows her way around, especially when I am trying something out. She has a way of figuring out all my planned surprises – but on this one, I caught her unawares,” said Mr Buluma.

Mr Buluma says the script was quite complex – and entailed a part where he was ‘arrested’. 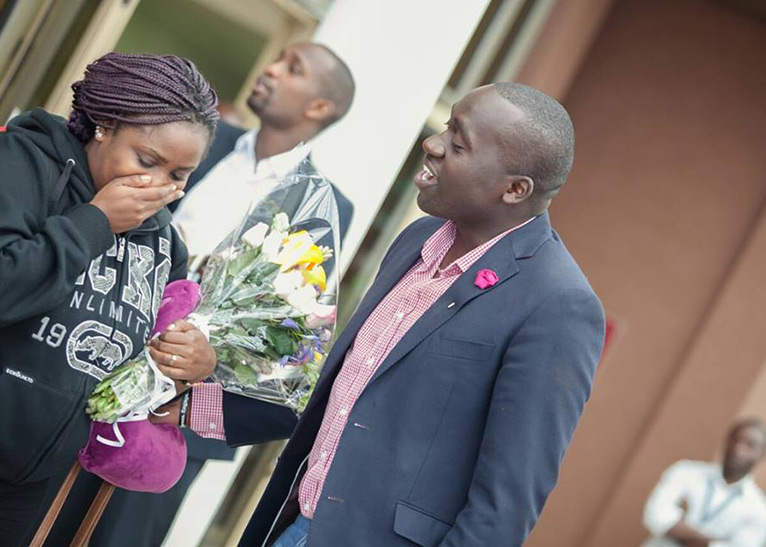 “Guys know half the story. There is a part where I somehow appeared to have been arrested because I picked a note inside the luggage area then we came out together. When we were outside that is when she realised kumbe this is happening, there is a band playing; she did not know it was her band. Not until she saw the placards written: ‘Gettie will you marry me?’ That is when she realised, wow all this was done for me.

But just how long did it take Mr Buluma to come up with such a creative proposal idea?

“I don’t know how long it took me to hatch the plan, but I think as soon as she was out of the country I just started thinking and planning. I don’t think it took me much effort.

“Gettie is someone who understands me from a different dimension. Ever since we became friends and then lovers and now we are going to be husband and wife, she has always reached out for the best out of me. She is that type of a person who no matter the situation, she just wants the best out of me. If it means she has to cover up, she has to do everything; she will go that extra mile to make it work for me and for us. I think that level of sacrifice is rare.”

And, his feeling when she accepted his proposal? “I was over-excited! It was one of the best moments so far. Of course I am waiting for the marriage which will take place at a later date.”

Mr Buluma acknowledges he is not one of the best people to advise the youth on matters love, but has nuggets of wisdom to share, anyway.

“I would tell them to listen to their instincts, they should pay more attention to the person they love – go to the deep details of making your partner happy. Don’t just stop at the proposal. It begins where people think it ends. For us, it is like we have just started dating. We don’t anticipate a climax anytime soon. We believe in growing our love and giving it as much attention as it requires, being there for each other and I think that is the principle.”