Wendy Rabella Omollo’s smile and perfectly curved facial expression ooze a mixture of both shock and pride; shock that something she bumped into by chance has landed her this far, and pride in the strides her effort and hard work have taken her to.

Bella, as she is popularly known, describes herself as a private person who wouldn’t be with a man “who isn’t aware of himself, or who sags his pants.”

While in a stable relationship with a man she refuses to reveal to the public, the beauty queen mentions Jidenna as her celebrity crush because, “…he’s not a boy. He’s a man.”

Edaily sat poolside with the twenty-two year old Journalism student at a posh hotel along Lenana Road and engaged her in a tête-à-tête.

How did you bump into modelling?

I guess I’ve kind of always wanted to be a model. From such a young age, I would take my mum’s make up, which always got me into a lot of trouble, and apply a little bit of this and that and put the lip stick on and do my catwalks. But it was just something I was doing for fun, I didn’t know it would be this serious.

Then when I joined high school, I tried to take it to another level. I contested for the Miss Asumbi; which I lost but gained a lot of fans in school in the process who felt like I should’ve won, so I said to myself, “You know what, you can actually do this.”

So I signed up for a Nairobi-based modelling agency. And, at first, it was kind of difficult since I was staying in Homa Bay at the time and I had to switch back and forth for the modelling trainings in Nairobi and school in Homa Bay but I endured because it was what I wanted to do. By the time I was done with school, I knew all the basics of modelling.

But because I wasn’t as visible or recognizable by then, it reached a point where I realized that modelling wasn’t really giving me as much I was putting in. I was just on the verge of quitting when Miss Tourism Homa Bay came up.

A friend of mine tried persuading me to try out but I was like, “Naah, I’m done with modelling.” Then I told my sister about it and she decided she would try out. And when we got there, I changed my mind and decided I was going to try out as well. And I got in.

I wasn’t ready. You know, you get into a beauty pageant and models come with lots of suitcases for shoes and dresses and make-up, but I just had one suit case. And that made me feel like I wasn’t good enough at times. There were sixteen of us, and I won. And I felt like fate was showing its hand to me because, remember, I was just about to quit modelling when this opportunity had come along.

I was still quite naive by then; I didn’t even know how to properly do my make-up when I first got there. Of course, I was confident in myself but when you meet 46 beauties from other counties, some of whom are professionals who have been in it for a long time, you kind of just go like, “Okay, let’s give it a shot.” And I didn’t win that first time. I wasn’t even in the top ten. But, again, fate showed its hand to me.

I didn’t publicise my involvement this time round. Because I didn’t want to be known as the girl who tried out twice and failed both times.

When the voting phase came in, I didn’t even make a poster. Neither did I ask people to vote for me. I didn’t want the embarrassment that would’ve come with if I didn’t win. But here we are.

What are some of the opportunities that winning the Miss Tourism Kenya has exposed you to?

For starters the Ministry of Water endorsed me as the Water Ambassador, which even had me attend the World Water Week in Europe. And I’m really grateful to them as they were supportive even as I went for Miss Tourism International and they continue to be.

I’ve also had the chance of working with the Elizabeth Glaser Pediatric Aids Foundation who also endorsed me as an Ambassador last year. We travel across the country giving peer education to adolescents.

I was also endorsed as a Global Peace Ambassador, which had me travel to Burundi for the Bujumbura Peace Run.

I’ve also been able to work on a couple of projects with Ficha Uchi; a program that aims at restoring dignity to children by giving them new uniforms.

Does modelling qualify as a career for you? Do you live solely off modelling?

Yes, modelling is a career.

But, No, I don’t live solely off modelling. I run a tour firm, Bella Adventures, involved in tourism and travel within the country. I also do a couple of things here and there which I wouldn’t like to publicly discuss at this point. 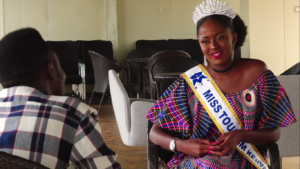 I’ll be honest with you, out there, a black girl is not given the same opportunities as the others. You have to be extra extra good to even be noticed. I learnt that if I wanted to compete with the Asians and the whites, I had to be truly African. You cannot beat an Asian by wearing Asian clothes. So the first thing I had to do was to stand out from the rest and stick to my roots; like, any time I was given a chance to play or dance to music, it would always be Kenyan music.

The competition was tough; there were lots of beautiful and talented girls from across the world. But, the one thing that makes the difference is you standing out and being yourself.

Secondly, I had to make sure I always looked good. I would wake up early and do my make up and make sure my hair was perfect.

And then you have to be social and friendly with everyone; you cannot be a beauty queen who is arrogant.

Going by all the talk of sexual harassment over the past 3 months, mostly in Hollywood but also back here, have you ever been a victim of the vice yourself?

No, I have never been sexually harassed, personally. I’m a private person, I don’t want to get myself that deep into the industry. And, so, you will not find me at all the shows or auditions. But I really feel bad for those that have been, and I hope that it doesn’t happen to anyone else.

As a beauty queen, you sure must attract a lot of attention from the male folk. How do you handle it?

Like I said, I’m a very private person. I would come to an event and smile for the cameras and take pictures with everyone but once I’m out of there, I’m out. I cut all links.

Yes, I’m seeing someone. Don’t ask me who (*soft laughter*) but he’s not in the limelight, and he doesn’t want to be. We are happy privately.

When you’re not modelling, what do you like to do with your free time?

I enjoy horse-riding, riding quad bikes, out-of-town zip-lining with friends, and travelling to quiet places like Samburu and Maasai Mara. I also enjoy a good nyama choma so barbecues anytime.

What do you cook best?

(Laughs) No. Of course not as a combination. 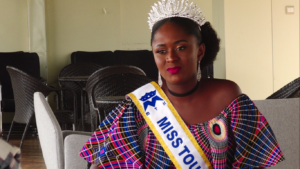 Oh. Since you began modelling to where you are today, what is the meanest comment someone has ever made to you?

I went to an audition five years ago and someone told me, “You’re not good enough, this is not for you.” I mean, there have to be more polite ways to turn someone down, right?

Where would you like to be five or so years from now?

I want to be running my own modelling firm/agency. I want to train young upcoming models and make them into the best versions of themselves.

I also want to settle down and have a family.

Just two; a boy and a girl.

You’ve achieved so much in such little time, two quick things  here; do you consider yourself successful? If, so, what is your definition of success?

Do I consider myself successful? I’ll be confident enough to say Yes.

Given the chance, which celebrity’s closet would you raid?

Bonang Matheba for the social setting. And Michelle Obama for corporate.

Mercy Masika, I think she’s phenomenal, plus a friend of mine says we look alike.

For the guys I’d go with King Kaka and Otile Brown, they’re super talented and deserve more than they’re getting.

Who do you look up to as far as modelling is concerned?

Almost all models I know look up to Naomi Campbell, why is that? 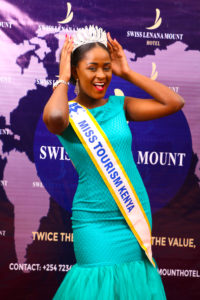