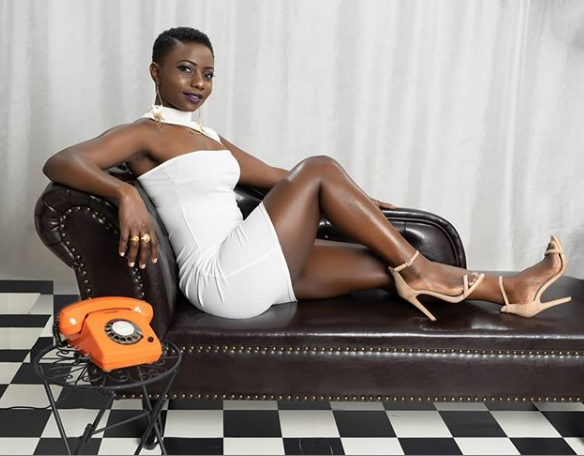 Philly Ojallah, born and bred in Migori, is now one of the most sought-after deejays in Europe; the once timid girl presently graces and spins at various high-end arenas in Germany.

EDAILY reached out to the sassy DJ – who plies her trade as DJ Aisher – during which she revealed that her career in the mostly male dominated field began in 2014 through YouTube tutorials.

Two years later, she signed up for a deejaying competition in Frankfurt, Germany, and beat out six competitors – all men – to emerge top.

That, she added, was perhaps the turning point in her life when she realized she could actually do this for a living.

“It opened my eyes to more opportunities and directed my will towards doing more practice. People thought I was good but deep down I was not comfortable, I knew I still had much to do in order to be within or beyond deejays standards,” says DJ Aisher.

Being one of only a handful other ladies in the field, she revealed that her strongest weapon has been nothing besides putting on a happy face and remaining jovial while going about her work.

DJ Aisher has played for countless and well accomplished international artists including Wizkid, Davido, Timaya, and J Martins, but has somewhat still managed to maintain her support for musicians from her own backyard as well.

“She is notorious for playing Kenyan music in our clubs and we are getting used to that sound,” remarked Anja Fischer, a Berlin-based chef.

Aisher, who is in the process of setting up her own empowerment center, has also hosted Sauti Sol and Otile Brown.

“Understanding and being in harmony with the vast cultural practices played an essential part to my growth and that is why I like encouraging the Kenyan youth and teens doing music by simply playing their songs to the world,” she said.

“It is sad that the year has been marred with a lot of young suicidal and depression cases, an indication that someone needs to listen more to the new generation and give them hope. That’s all I strive to do using my talent.”

Aisher is no doubt a show-smashing frabjous, a fact that has also led East Africa’s biggest artists to seek her services.

The Kenyan hosted Tanzanian singer Ali Kiba on June 28, 2019 in Berlin and is set to host ‘Kanyaga’ hitmaker Diamond Platnumz on September 7, 2019.

She also told EDAILY about organizing the diaspora Ramogi Festival in Germany set to go down this November, besides getting ready for her homecoming tour that will see the star gracing different venues in Kenya, Uganda and Tanzania.

“My daily motivations are very simple. Work out daily; Do not compare, do not compete, just do you; and We all need someone to assist us control the things we cannot,” she added.

“We are diving towards a more busy phase of the year, we are more keen on making moves that will enable us realize the most positive outcomes for everyone,” said Brian Oguna, Aisher’s manager and Brocom Entertainment founder.