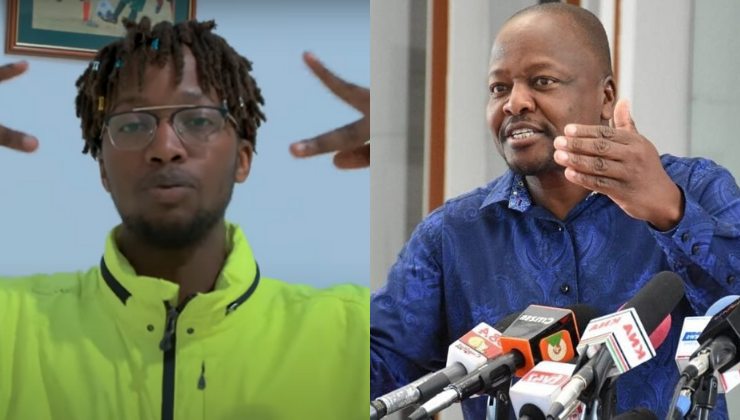 The newest kid in the Kenyan music industry is the son of the, arguably, most vibrant Cabinet Secretary on the block right now, who would have thought?

The track, released in November last year from his debut EP ‘Trial and Error’, blew up during this COVID-19 period and attracted the attention of even established acts like rap maestro Khaligraph Jones who expressed interest in a remix.

However, what most Kenyans may not know is that the now fans favorite – Kahu$h – is the son of Health CS Mutahi Kagwe.

The rumors have been going round for a while now and when asked about it during an interview on Standard’s Pulse magazine published on Friday, the artist said:

Kahu$h, in the interview, described himself as a “trap and shrap rapper” as well as a “footballer and you’ll catch me on the pitch in my free time.”

He spoke about discovering his love for music and deciding to pursue it while in the United Kingdom where he had gone on a football scholarship.

“The hip-hop scene in the UK is blooming exponentially. Being in the UK motivated me to represent my home, just like other pan-African artists there,” he said.

“The quest to find my style and sound has seen me spend countless hours with my laptop and mic. It is still a journey that I’m consistently on.”

The artist is currently enjoying decent airplay owing to the release of his latest EP ‘Niko’ which he said he started working on in August and through which he aimed to “make it clear as a young African and how I live and think in different scenarios and vibes.”

He added: “I wanted to have a tape to show that despite all these things behind the scenes, loss of friends and loved ones, drugs, violence, there’s still a way to show that I’m around and staying, ‘Niko.’”

While saying that his musical dream for the next 10 years is “to keep them wondering how I keep getting better” and “to keep the industry growing,” he also revealed that he would love to work with, among others, Boutross, Xenia Manasseh and Bey T.