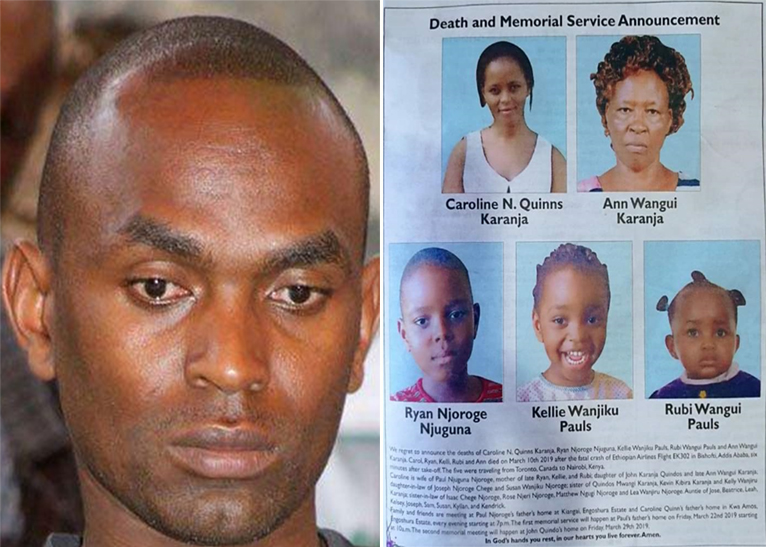 BY ROBERT MAINA IN NAKURU COUNTY.

A man who lost five members of his family in the Ethiopian Airlines crash on March 10 has said his late wife had a premonition of the tragedy.

During his tribute to the deceased at a requiem mass held at the family’s home in Kiangai Ngacura Village in Bahati Sub-County, Nakuru County on Friday, Paul Njoroge said his wife, Caroline, had had “nightmares” a few days before the tragic accident.

“She [Caroline] had experienced disturbing nightmares a few days to the crash. According to her, an extremely sad moment would befall me. I, however, played down her bad dream, telling her she was worried because I was about to shift to Canada soon. I was saddened that her dream manifested in the form of her death alongside our children and my mother-in-law,” said Mr Njoroge.

Caroline and Paul were married for 13 years.

The requiem mass was held just a few days after Mr Njoroge declined to bury soil collected from the crash site, saying it was against his religious practice.

His statement came right after the Ethiopian Government stated that DNA results for the 157 crash victims would take six months to be released.

“The six months the [Ethiopian] Government has requested so that it can receive results of the DNA analysis on the 5,000 pieces of human bodies collected from the scene is too long, and so we will just hold a prayer mass and wait for DNA results,” said Mr Njoroge in a previous interview.

“They should be allowed to mourn and gradually come to terms with the distressing loss,” said Governor Kinyanjui.

The requiem mass ended by mourners placing flowers on a table.