According to US entertainment website Radar Online, a source close to the rapper had confirmed the news saying, “Tyga wants a DNA test because he really thinks that there is a chance this baby could be his.”

“Tyga told friends that he was still sexually active with Kylie nine months ago, when this baby was likely conceived,” added the source. 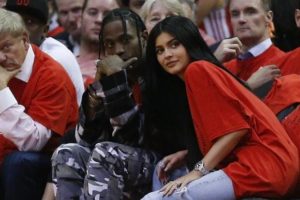 Although Travis, real name Jacques Bermon Webster II, is named on Stormi’s birth certificate as the actual father, the Rack City star appears to be having none of this.

When the news of Kylie’s pregnancy was confirmed in September 2017, Tyga took to SnapChat claiming he was the father of the then unborn child. He, however, later took down the post and retracted his statement.

Kylie and Tyga parted ways in April 2017, a while before she started seeing Travis.