KTN Kenya journalist Joy Doreen Biira on Sunday, November 27 was arrested and detained along with the king of Rwenzururu in Western Uganda over clashes between police and militia which killed at least 55 people.

Joy Doreen together with her fiancé were allegedly picked from her home in Kasese by uniformed men on Sunday evening.

The Ugandan-born news anchor was allegedly arrested over social media posts she made concerning the violence between Ruwenzuru kingdom loyalists and government forces.

Joy Doreen took to her Facebook page on Sunday, November 27 and wrote:

It’s so sad what I’ve witnessed today with my own eyes…part of the palace of the Kingdom I’m from, the Rwenzururu kingdom, burning down. It felt like watching your heritage deplete before my eyes.

So the word on the ground is that there have allegedly been recruitments ongoing in exceed of 1000 men with a motive not yet crystal clear. The heavy gun fire/battle exchange between the army and the loyal guards that lasted over 2 hours this afternoon was apparently after negotiations didn’t bear fruits.

The thing is men have been killed. Not just men but possibly bread winners of families from both sides of the army and royal guards.

Importantly I have watched part of my heritage burn up in flames from nearby.

Where did it all go wrong? Why the killings? Why the rage? Why the stubbornness? Why the ignorance? Why the thirst for bloodshed?”

The king, Charles Wesley Mumbere, is accused of inciting violence after militiamen reportedly attacked a police post in his hometown of Kasese.

According to Additional Inspector General of Police of Uganda Felix Kaweesi, Charles Wesley Mumbere is to be blamed for what happened in Kasese.

“We had negotiations with Charles Wesley Mumbere for almost a whole day but he failed to comply,” added Mr Kaweesi.

Government security forces stormed his palace amid claims he was harboring fighters.

The king has, however, denied any involvement in the violence.

At least 14 police officers and 41 militants have died in the clashes.

A Ugandan government spokesman accused the militia of seeking to break away from Uganda.

The king is now in police custody in Kampala.

During an interview with NBS Television on Monday, November 28, Kaweesi confirmed that Joy Doreen was safe and sound.

“Joy Doreen Biira is safe and I have talked to commanders that if there are charges, let her be granted police bond,” he said.

However, the AIGP cited that KTN’s Joy Doreen Biira ‘misbehaved’.

“I think she misbehaved, she might have accessed a cordoned off area. This is a simple matter and it has been sorted,” he said.

The security boss also downplayed reports of tension in Kasese, saying that police have restored calm in the area.

“The situation in Kasese is very calm, life is normal and people are back to their businesses. The king was arrested purposely to save him from danger and he’s a key player in this situation. He’s a police facility in Kampala.” 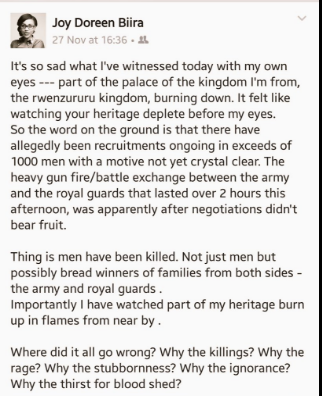