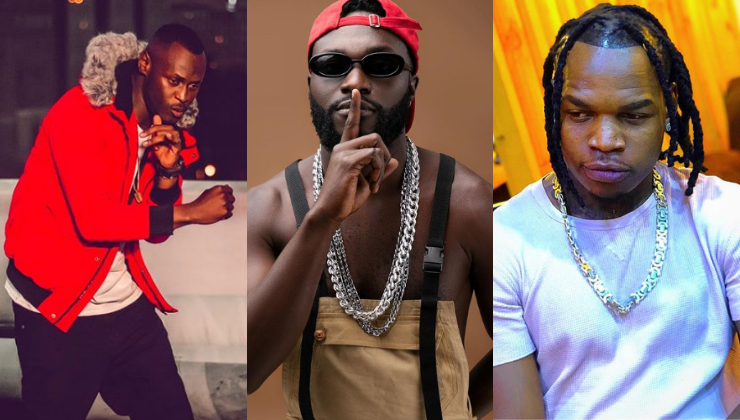 The body mandated with collecting royalties on behalf of Kenyan musicians has now come under heavy criticism over allegations of sending ‘peanuts’ to their members.

This comes after a section of Kenyan musicians – led by Hip Hop heavyweight Khaligraph Jones – shared screenshots of their earnings as sent to them by the Music Copyright Society of Kenya (MCSK).

MCSK, according to their Twitter bio, is a Collective Management Organizations (CMOs) mandated with collecting royalty on behalf of “authors, composers, arrangers and publishers of musical works.”

And according to the body, Kenyan artists such as Khaligraph, King Kaka, Timmy Tdat, Fena Gitu, Anto NeoSoul, Holy Dave among a host of many others had only earned Ksh.2,500.

The musicians have since taken to Instagram to air their frustrations, with Khaligraph and King Kaka threatening to storm the MCSK offices for the fair share of the collected royalties.

Khaligraph further warned the body from ever sending him such “peanuts” again, adding that “infact I have given authorization for my music to be pirated, don’t collect money on my behalf anymore.”

Achika hitmaker Timmy Tdat, in a phone interview with EDAILY, labeled MCSK as “frauds”, adding that “they should stop collecting our royalties.”

“Kenyan musicians are being played. MCSK cannot say the Ksh.2500 they have sent us now is for only two months yet we cannot even remember the last time they paid us,” he stated.

According to Timmy, however, the society’s distribution system is heavily flawed because “you cannot tell me that I earned the same as, for instance, Eric Wainaina and Khaligraph Jones and every other artist out there.”

The agitated star further stated that instead of sending them “peanuts”, MCSK should present them with the royalties collected after a period of time and then they – artists – would “take it to a children’s home or use it to buy food for the starving communities in areas such as Turkana.”

Naiboi, another heavy-hitting Kenyan musician, also separately told EDAILY – on the sidelines of an interview on Hot96 – that he last received royalties from MCSK in 2014 after his then smash hit ‘Welle Welle’ with Timmy.

“They may have been in court for the better part of these years but even during that process, money meant for musicians was still in their accounts. So they cannot tell us that we only earned Ksh.2500 from the past two months, where’s the money from 5 years ago?” Posed the ‘Sondeka’ hitmaker.

On his part however, Kaka Empire Founder and CEO King Kaka’s main squabble with MCSK is the alleged lack of transparency in the whole process.

King Kaka faulted the CMO for not properly explaining to the musicians how the royalties were collected and how uniform figure of Ksh.2500 that was distributed to artists was arrived at.

He also reiterated the argument that, having been in the cold for about 5 years now, musicians deserved a lot more than the amount they received.

“My opinion is that Kenyan artists should come together and form a separate body that collects our royalties. Because the person seated behind a desk at MCSK does not know the struggle we go through in this music industry, only we do,” he said.

“We should form our own CMO and run our things by ourselves in a fair and transparent process; I mean how hard could it possibly be?”

MCSK Chief Executive Officer (CEO) Milka Kulati said the amount was royalties collected for the months of May and June alone.

Ms. Kulati further stated that the amount summed up to at least 43.5 million; which, she said, was 70% of the total royalties collected, in accordance with the law.

The MCSK boss also added that the amount was only collected from public spaces, such as barber shops and matatus, adding that the body was unable to fetch any royalties from clubs and restaurants due to a court order.

“I would say this was the best performance ever. What we did, based on whatever we collected, is called general distribution; where all our 14,000-plus members are given the same amount of money,” said Ms. Kulati.

“The royalties collected for the month of July will hopefully be distributed in October together with what we will have collected August and September.”

She further added that: “We have not yet started collecting from broadcasters; and the distribution for this will be different, it will come with logs indicating the amount of airtime received by all our members hence they will get their share according to that.”

According to the CEO, the body only received back their license to collect royalties in March this year after a long-spanning court process, hence the amounts.

Kenya Copyrights Board (KECOBO), which awarded the licenses for collection of royalties to the three available CMOs – Kenya Association of Music Producers (KAMP), Performance Rights Society of Kenya (PRISK) and MCSK – stated that it ensured the royalties were collected and efficiently distributed.

“KAMP, PRISK and MCSK have distributed a total of Ksh.80 million to their members. The amount distributed represents a 68 percent of the total income of Ksh.118 million jointly collected by the three CMOs,” said KECOBO Executive Director Edward Sigey in a press release.

“The Kenya Copyright Board has since received statements and logs from the three CMOs confirming payment of royalties to most members. The members have received amounts determined in accordance to distribution rules of each society as set out by members of the respective CMOs during their Annual General Meetings or at the Board level.”